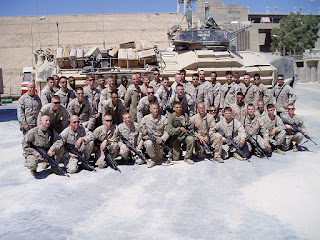 “We are working with 2/6 to develop a suite of new training tools that are easy to implement, tailorable to Marines’ needs and include the ability to assess decision-making skills.” said Dr. Peter Squire, a program officer in ONR’s Expeditionary Maneuver Warfare and Combating Terrorism Department. “Exercises like Spartan Week enable the Marine Corps to better examine the use of training technologies to improve tactical decision-making at the small-unit level.”

I-TDG is a web technology-based application that allows Marines to plan missions and conduct “what if” tactical-decision games or simulation-based exercises. It supports maps and multimedia tools and links to ONR’s HoloLens augmented-reality headset.

To rapidly develop terrain models to support these technologies, Marines were trained to operate a prototype, quadcopter-based terrain-mapping system. Two Camp Lejeune training sites were flown over and mapped out, and the resulting imagery was used to build terrain models for the training systems.

“Small-unit leaders are tasked with making big mission decisions in an extremely short time window,” said Natalie Steinhauser, a senior research psychologist at Naval Air Warfare Center Training Systems Division in Orlando, Florida who took part in Spartan Week. “These decisions not only impact the success or failure of a mission, they affect life and death. With technologies like I-TDG, Marines can perform simulated missions in a safe classroom environment, carry out multiple missions and even use I-TDG as an after-action review tool.”

Steinhauser said Camp Lejeune’s Spartan Week was a success and that another event will be held at another location in early 2017. Perhaps the real measures of success, however, are endorsements from Marines who participated.

“For me, the best part of I-TDG was recreating simulated battles we conducted in the past and using the system as a debrief on what we did wrong and how we could be better,” said Lt. Andrew Veal. “Like athletes watching game film, you really experienced that ‘a-ha’ moment.”

“The Spartan Week technology enabled all Marines, from squad leaders to riflemen, to evaluate their ability to make fast decisions,” said Cpl. Fredrick Zuberer. “Marines tend to focus on using their bodies as weapons, but the most important weapon is the mind. Spartan Week helped sharpen that weapon beyond just pulling a trigger.

Part of what we talked about with MG Robert Scales was this sort to simulation training:

All of which ought to remind us that many of our great military leaders, while lacking the modern tech that ONR provides, cut their teeth is wars fought before the wars for which they became famous - nearly all the major leader of both sides in the U.S. Civil War fought first in the Mexican War, Washington fought in the French and Indian War, etc.

While I doubt that anything matches the pace and chaos of real combat, it can only help young officers to gain experience without actual risk to troops in the field.