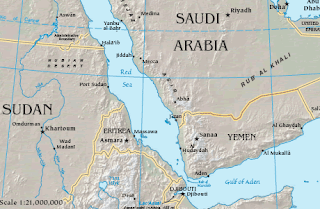 The Houthi boat that attacked and hit a Saudi frigate Jan. 30 in the Red Sea, reported earlier as a suicide boat, was instead carried out by an unmanned, remote-controlled craft filled with explosives, the US Navy’s top officer in the Mideast said.

“Our assessment is that it was an unmanned, remote-controlled boat of some kind,” Vice Adm. Kevin Donegan, commander of the Bahrain-based US Fifth Fleet and head of US Naval Forces Central Command, told Defense News in an interview here Saturday.

The attack on the frigate Al Madinah appears to be the first confirmed use of the weapon which, Donegan said, represents a wider threat than that posed by suicide boats and shows foreign interests are aiding the Houthis.

Read the whole article, which reflects an opinion that those "foreign interests" are Iranian:


The unmanned boat was likely supplied by Iran, Donegan said. 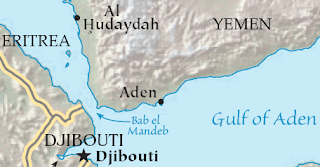 “I don’t know that it’s Iranian-built, but I believe that it’s production in some way was supported by Iran,” Donegan said.

Why would Iran do this (in addition to just making trouble)? I had thoughts earlier Missile Attacks Off Yemen and the Iran- Saudi Proxy War for Oil Shipping Chokepoints and Fun with Iran: Iran "Naval Ambitions".

Recall that the Bab el Mandeb Strait is a vital choke point (as pointed out in the Cavas article) or as the U.S. Energy Information Administration sets out:


Closing the Bab el-Mandeb Strait could keep tankers in the Persian Gulf from reaching the Suez Canal and the SUMED Pipeline, diverting them around the southern tip of Africa.

The U.S. Navy's Office of Naval Intelligence has a warning out here:


Red Sea, Bab-el-Mandeb Strait and Gulf of Aden Commercial vessels in the region of the Red Sea, Bab el Mandeb Strait and the Gulf of Aden should operate under a heightened state of alert as increasing tensions in the region escalate the potential for direct or collateral damage to vessels transiting the region. These threats may come from a variety of different sources such as missiles, projectiles or waterborne improvised explosive devices. Houthi rebels claimed responsibility for an 01 October attack on a UAE vessel. . .

and so to the regular ONI report.