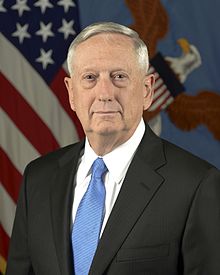 that the amount of American support for NATO could depend on whether other countries meet their own spending commitments.

“Americans cannot care more for your children’s future security than you do,” Mr. Mattis said in his first speech to NATO allies since becoming defense secretary.* “I owe it to you to give you clarity on the political reality in the United States and to state the fair demand from my country’s people in concrete terms.”

“America will meet its responsibilities,” he said, but he made clear that American support had its limits.

In his speech to NATO defense ministers, Mr. Mattis repeated a call made by previous American secretaries of defense, for European allies to spend more on their militaries. His comments on Wednesday give teeth to President Trump’s expressed skepticism about the alliance.

What’s more, Mr. Mattis went further than his predecessors in apparently linking American contributions to the alliance to what other countries spend.

“If your nations do not want to see America moderate its commitment to this alliance, each of your capitals needs to show support for our common defense,” he said.

I think I hear Euro heads exploding - their social welfare spending does not include sufficient defense of their nations - because they long have counted on the U.S. to have the laboring oar. However, the U.S. has carried some of them for over 70 years and that is not how partnerships are supposed to work. I know previous SecDefs have made the same point - but Secretary Mattis, well, he seems to have a way with words.

By social welfare, I include the idea that a primary function of a state is to protect its citizenry.

Next, how about a discussion of those sea lines of communication the U.S. is protecting? How about some load sharing?

That being said, we, of course, properly should thank France for using its carrier and carrier air as an ally.