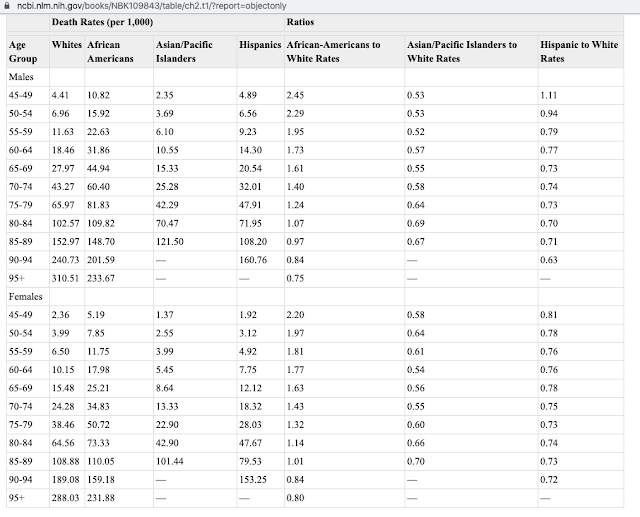 The chart, from the National Institute of Health here, show that at certain age ranges, especially 45 to 69, that the ratio of African American deaths to white American deaths is about 2 to 1.

Today, we have news reports that the African American community is affected more by COVID19 than the white community. For example, the report here from the Chrisitian Science Monitor:


Of the victims whose demographic data was publicly shared by officials – nearly 3,300 of the nation's 13,000 deaths thus far – about 42% were black, according to an Associated Press analysis. African Americans account for roughly 21% of the total population in the areas covered by the analysis.
***
"The rate at which black people are dying, compared to whites, is really just astounding," said Courtney Cogburn, an associate professor at the Columbia University School of Social Work. "There are patterns at this intersection of race and socioeconomic status that make it very clear this is just not a story about poverty."
***
The data collected ranges from New York to Illinois to Alabama to San Diego, and covers an area that represents 82 million Americans, nearly 43% of whom are nonwhite. Other minority groups' cases and deaths are fairly in line with their demographics, although those among Hispanic individuals in some hot spots are still high.
***
For instance, Louisiana tracked demographic data in 512 deaths and found 70% of victims were black, despite African Americans comprising just 32% of the state's population. In Michigan, more than half of the deaths where race data was collected were black residents; the state's population is 14% black.

Illinois' population is 17% Hispanic and 14% black yet, as of Monday, 63% of its caseload of more than 9,000 COVID cases with racial data recorded were nonwhite residents, and at least 40% of the state's 307 victims were black.

ZIP code data in New York City released last week showed that black, brown, and immigrant communities are disproportionately represented among the diagnosed virus cases and deaths. On Wednesday, the city's Department of Health released racial data showing 27.5% of the victims whose race is known are black, although blacks are only about 22% of the population.

What's the point here?
Given the 1989 numbers, a ratio of 2 to 1 of African American deaths in certain age ranges might be just the historical pattern repeating itself.

Now, given that, the underlying reasons for that ratio represents a challenge - a "curve that needs to be flattened." Now, the argument is that African Americans lack access to healthcare or health insurance coverage that would help the flattening process. However, some indications are that African Americans in the US are 79.2% covered by insurance and white Americans are 84.6% covered. "Latinos" are roughly 70% covered. Under these conditions, logic would dictate that Latinos would have a higher ratio than African Americans, but the chart shows that they don't.

Some else from the CDC here: 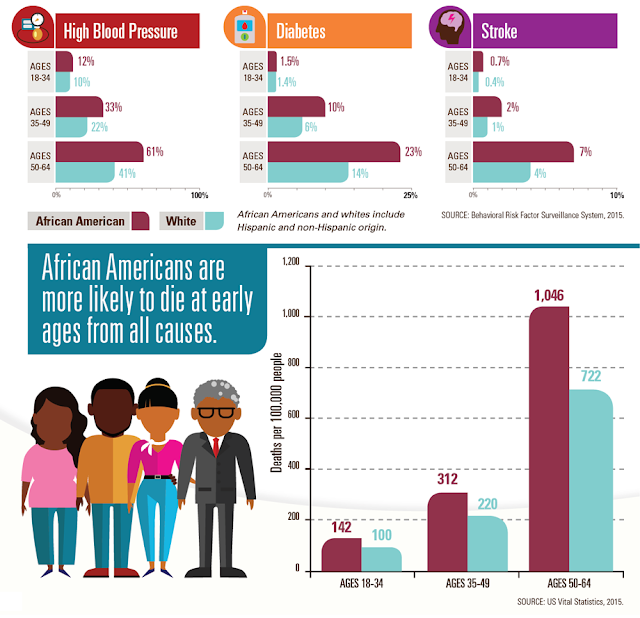 COVID19 just seems to be tracking along the historical rates. As noted in the following graphic, the underlying causes for this mortality rate might be controllable, especially in reducing of smoking and obesity and increasing activity: 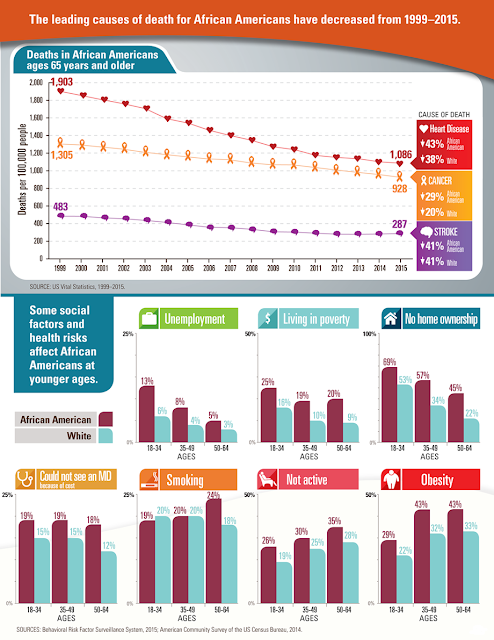