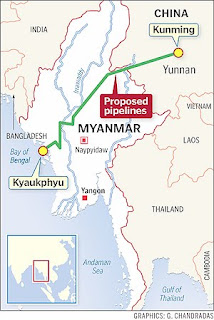 China wants faster, perhaps more secure oil flow. So, instead of relying solely on tankers traveling the Malacca Strait chokepoint, the South China Sea and the various other chokepoints in the south Asia seas, they begin a Myanmar oil pipeline:

The 771-kilometre (480-mile) pipeline will connect Maday island and Ruili in the southwestern Chinese province of Yunnan, the statement said.

The pipeline is expected to carry 12 million tonnes of oil a year in the first phase, CNPC said without giving a timeframe for when it would become operational.
***
Around 80 percent of China's oil imports, from areas such as the Middle East and Africa, are currently transported through the Malacca Strait, one of the busiest waterways in the world, according to earlier Chinese media reports.

The pipeline -- in the works for years -- would allow at least part of the Asian giant's crucial oil supplies to arrive without travelling through the strait, where pirates are known to operate.

It also would cut 1,200 kilometres off the current maritime delivery route, the reports said.

CNPC, which has made a total investment of around two billion dollars, would eventually be able to deliver 22 million tonnes of crude a year via the pipeline, Chinese media reports said.

Not everyone is thrilled.