Somali pirates grabbed another ship north of the Seychelles, as reported here:

Early this morning on 11 November a Greek owned (Marshall Island flagged) vessel named the MV Filitsa was hijacked in the south Somali Basin, 400 nautical miles North East of the Seychelles. The Bulk Carrier with a deadweight of 23,709 tonnes has a crew of 22

consisting of 3 Greek and 19 Philipino. The vessel that was heading for Durban, has now turned around and is heading north.

(Filitsa photo from ShipSpotting,com by Daniel Ferro and used in accord with ShipSpotting terms)

attacked yesterday. Pirates fired automatic weapons on MV Nele Maersk but she could outrun the pirates with a high speed. No casualties were reported.

A second attack this morning was in the southern part of the Somali Basin 530 nautical mile east of Dar es Salaam, Tanzania, and 420 nautical miles west of Victoria, Seychelles. MV Felicitas Richmers, a Marshal Islands flagged Container Ship was attacked by two small skiffs. Automatic weapons were fired on the ship. With evasive maneuvers, speed and other anti piracy methods MV Felicitas Rickmers also managed to evade the attack. No casualties were reported.

The pirates seem to be well inside the shipping protection OODA loop. Really, so long as the pirates use adequate "mother ships" to place their attack boats in shipping lanes, there is little limit to their range.

Once again I suggest Indian Ocean convoy protection and routing - see here. As I said there, "Move the sea lanes, the pirates simply will move with them."

UPDATE: Blame the good weather? Wind charts for the area are on the right side of this page.

I blame the pirates.

UPDATE2: From the NATO Shipping Center:

On 11/Nov at 0820Z a suspect vessel was detected in position 01 10N 059 04E. The craft is 8-10 mtrs long with 9 people on board. It is towing two smaller skiffs 4-5 mtrs in length. All skiffs are white in colour and equipped with outboard engines. It is assessed, that this is a pirate mother ship.

On 11/Nov at 0100 UTC a merchant vessel came under attack by pirates in position 00 35S 062 40E. Most likely the vessel is now under pirate control heading northwest towards the Somali coast. During the last three days there were two unsuccessful pirate attacks in the vicinity of that position.

It is recommended that all vessels not making scheduled calls to ports in Somalia, Kenya or Tanzania keep as far from the Somali coast as possible. MSCHOA now advise that vessels should consider maintaining a distance of more than 600 nautical miles from the coastline and when routing north/south consider keeping East of 60E Longitude until East of the Seychelles. 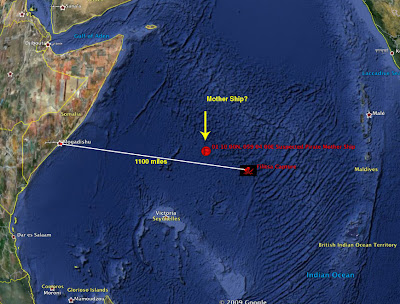