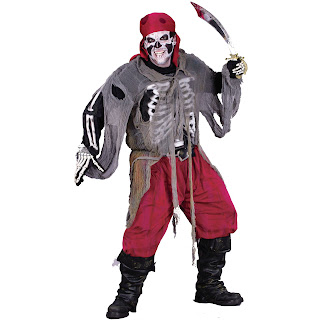 Halloween was yesterday, but . . . why not a follow up with a nautical connection?

When I was in grade school you could buy "Scholastic" books at school and I once ordered a book about "true unsolved mysteries" - I can't remember its title, but it was full of tales of spontaneous human combustion, the disappearance of a man walking across a field in full view of witnesses and much more of interest to a 10 or 12 year old.

Among the "much more" were tales of ships found a sea, sails fully set, food on the table and not a crewman aboard.

About a year and a half ago there was the report of an Australian yacht found - you got it - fully operational with computers, GPS and 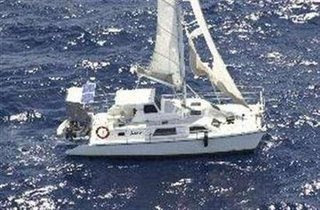 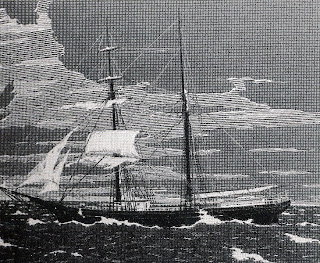 Before that mystery, there have been several mysterious ghost ships reported from across the world.

Among the more famous - the Mary Celeste:

An example of an "occult" version of the ship's odd situation here.Before you get too excited, there was a hearing with a sensible result.

There is also the odd tale of Carroll A. Deering, claimed by some to be a "mystery of the Bermuda Triangle":

AS STRANGE AS THE “MARY CELESTE,” AND ONE OF THE MOST ACTED UPON MYSTERIES OF the sea, is the case of the deserted five-masted schooner Carroll A. Deering. Returning to Maine from Rio de Jenairo, the Deering stopped over at Barbados on January 9, 1921. She was next to be seen off the North Carolina coast by the Cape Lookout Lightship on January 29 at 4:30 p.m.. On the mornin 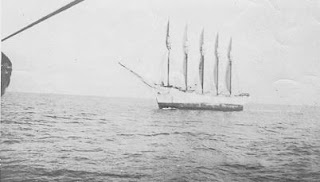 g of January 31, the Carroll A. Deering was found hard aground on Diamond Shoals, North Carolina. The ship was in a strange state of desertion; the eleven crew had vanished.

Cape Hatteras is home to many maritime legends but perhaps none is as curious as the real-life story of the massive schooner, Carroll A. Deering. Lost on the Outer Shoals in 1921 and discovered completely abandoned by the Coast Guard, this historical event has all the makings of a Hollywood ghost story.

On January 29, 1921, the Carroll A. Deering was making a return trip to Hampton Roads, Virginia from Barbados when she passed the Cape Lookout Lightship. According to the lightship keeper, the crew was milling about and a crewman, who did not look or act like an officer, reported that the ship had lost its anchors. The following day, the ship passed the SS Lake Elon southwest of the Diamond Shoals Lightship at approximately 5:45 pm. The Deering seemed to be steering a peculiar course. This was the last report of the ill-fated Deering before she was found run aground and abandoned.

At 6:30 am on January 31st, C.P. Brady of the Cape Hatteras Coast Guard Station spotted a five-masted schooner in the morning light, aground and helpless on the shoals. It was reported that the ship’s decks were awash, sails were set, lifeboats were missing, and she appeared abandoned. Due to heavy seas, the surf boats failed to reach the wreck. Finally, the wrecker Rescue arrived on the morning of February 4th and, with the cutter Manning, reached the battered ship around 9:30 am. Captain James Carlson of the Rescue boarded the ship and confirmed its identity as the Carroll A. Deering. Upon investigating the ship, it was discovered that all personal belongings, key navigational equipment, certain papers, and the ship’s anchors were missing. Furthermore, food was laid out as if in preparation for a meal. But there was no sign of the crew.

The wrecked and battered hull of the Deering was all that was left to signify the vessel’s strange passage. In March of 1921, with the vessel breaking apart on the shoals, it was towed away then dynamited. In April, Christopher Columbus Gray, a Buxton, N.C. resident, reported finding a note in a bottle, which told of the capture of the Deering by pirates. Handwriting experts authenticated the note as being written by engineer Herbert Bates. Later examination, however, by federal government experts proved the letter was a hoax, written by Gray himself. In May, Mrs. Lula Wormel (wife of the ship’s master), Captain Merritt (the former master), and Rev. Dr. Addison Lorimer visited Washington and convinced Secretary of Commerce Herbert Hoover to commence an investigation.

The ongoing lure of the Deering mystery may be due to the many historical threads uncovered in the investigation of this amazing story. Agent Thompson of the FBI visited Dare County in July of 1921. Among the leads he followed were stories of Bolshevik sympathizing pirates, rum-running gangsters, and mutiny. When he asked local Coast Guardsmen about the theory that the crew had mutinied and abandoned ship before striking the Shoals, “Impossible!” was the answer - the coast was too rough for lifeboat landings. “I believe they abandoned her after taking everything of value,” said Captain Ballance of the Cape Hatteras station, “and ran her up on the Shoals intentionally….”

In the end, the investigation proved fruitless. No trace of the crew, the ship’s log, or the navigation equipment was ever discovered. A true maritime mystery began…and continues to this day.

Then there's the saga of Ourang Medan:

In February 1948, distress calls were picked up by numerous ships near Indonesia. The SOS calls came from the Dutch freighter SS Ourang Medan. The signals claimed, "All officers including captain are dead lying in chartroom and bridge. Possibly whole crew dead." This message was followed by indecipherable Morse code then, "I die."

Within hours of the first distress signals, the first rescue ship arrived on the scene. Upon arrival, the rescue vessel tried to hail the Ourang Medan but there was no response to their hand and whistle signals. 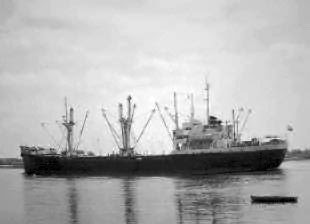 A boarding party was sent to the ship and what they found was astonishing. All the crew and officers of the Ourang Medan were dead, their eyes open, faces looking towards the sun, arms outstretched and a look of terror on their faces. Even the ship's dog was dead, found snarling at some unseen enemy. When nearing the bodies in the boiler room, the rescue crew felt a chill though the temperature was near 110°F.

The decision was made to tow the ship back to port. As the ship was prepared to be towed, smoke began rolling up from the hull. The rescue crew left the ship and barely had time to cut the tow lines before the Ourang Medan exploded and sank.

What happened the the crew of the Ourang Medan? Was it a UFO? Some other paranormal event that scared everyone to death? There is some speculation that the Ourang Medan was carrying illegal chemical weapons (this was post WWII). Could something they were secretly transporting leaked, killing everyone aboard?