The Eastern Mediterranean: Much Ado About Gas

So, Turkey has been shaking the war stick at Israel, making big noise over the Israeli blockade of Gaza that last year resulted in the stopping of Turkish ship and the violence that followed. In addition, Turkey is most unhappy with the discovery of large amounts of natural gas beneath the waters off Israel and Cyprus.

First, about the discovery:

The above map from Nobel Energy sets forth some discoveries made by that company, as described below: 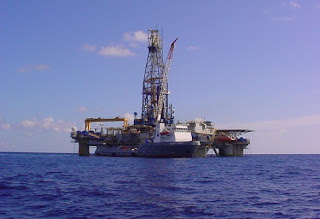 Noble Energy has been operating in the Mediterranean Sea, offshore Israel, since 1998. We have a 47 percent interest in the Mari-B field, the first offshore natural gas production facility in Israel. Production from Mari-B began in 2004 and sales volumes have increased as Israel’s power demand and pipeline infrastructure have expanded tremendously. Significant new exploration discoveries at Tamar, Dalit, and Leviathan will help meet Israel's energy needs and drive new potential for natural gas in the future.

The Company has recently completed two additional development wells at Mari-B. Combined with additional compression work in 2011, these new wells will support near-term gas deliverability and serve as injection wells for storage in the future.

We have a 36 percent operated working interest at Tamar, with gross mean resources of 8.4 trillion cubic feet (Tcf) of natural gas. Tamar was the largest deepwater natural gas discovery in the world in 2009. Sanctioned by the Company in September 2010, initial expectations target commissioning first gas from Tamar at the end of 2012. Development drilling at Tamar is underway, and the Company is continuing discussion with a growing number of parties to deliver reliable and clean energy resources to customers.

Leviathan represents the largest exploration success in the Company's history, with gross mean resources of 16 Tcf of natural gas. We are actively studying multiple export options, including both LNG and pipeline scenarios. The Company anticipates returning to appraisal drilling at Leviathan in mid 2011. Supported by 3D seismic acquisitions in 2009 and 2010, Noble Energy has identified a number of additional prospects and leads on our significant acreage position offshore Israel and Cyprus, with plans to drill three to four exploration / appraisal wells in 2011.

This discovery has major implications for Israel and Cyprus. With specific reference to Cyprus, this piece notes: 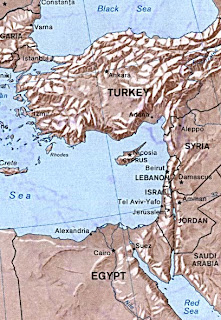 For Cypriots who always had an Arab-envy, seeing their neighbors drawn in oil while they have to import every drop of it, has been frustrating if not intoxicating. Loren Steffy, the business columnist for the Houston Chronicle, reports: “Just as the Israeli discoveries may transform that country from an energy importer to an exporter, a similar find off the coast of Cyprus could turn the island nation into a major European energy hub”.
Terry Gerhart, the Vice President for international operations of Houston-based Noble Energy declares: “Cyprus could be on the verge of a natural gas revolution. Gas will strengthen the Cypriot economy for decades to come. Cyprus will become the Mediterranean’s energy hub”.

Well, maybe - both Cyprus and Israel are going to have some serious challenges - as noted her:


From Israel, there is good news and bad news.

The good news – and it is huge – is that Israel will soon be awash in natural gas. Gas discovered on the country's outer continental shelf will turn the country from being hydrocarbon-deprived to being a net exporter.

Indeed, Israel is set to become so rich that it is laying the groundwork for creating a sovereign wealth fund for overseas investments in order to protect the country from inflation and the shekel from getting too strong.

The bad news is that with Hezbollah poised to control Lebanon's government, Iran has de facto arrived on Israel's northern border. Even without an Iranian nuclear weapon, this is a grave deterioration in Israel's security.

Already Lebanon has asked the United Nations to guarantee that Israel does not violate the integrity of Lebanon's outer continental shelf, where Iran plans to help Lebanon drill for gas.

Geology is about to change the political geography of the world's most combustible neighborhood.

The two huge gas discoveries are in the Tamar and Leviathan fields. Taken together, the gas reserves are estimated at 26 trillion cubic feet or 10 times larger than Britain's North Sea discoveries.

Since its creation in 1948, Israel has drilled on land for oil and gas with very little success. While the Arab Gulf countries have found and produced massive quantities of oil and gas, Israel has scrounged in the international markets for its hydrocarbons, including coal.

Israel's isolation made this difficult and expensive. In recent years, it has bought gas from Egypt. But Egypt will lose its good customer.

Turkey, once Israel's only Moslem friend – until the botched seizure of a humanitarian ship bound for blockaded Gaza – will be affected too. There were plans for a pipeline that would carry gas from Azerbaijan across Turkey and undersea to Israel. That economic boost will no longer be going to Turkey, but instead will probably go to Greece and Greek Cyprus. There have been preliminary discussions between Israel and Greece about shipping gas through Greece, by an undersea pipeline or a liquefied natural gas train, as an entry point into Europe.


Prospects of an underwater natural gas bonanza in the eastern Mediterranean have sparked a fresh row between Turkey and the divided island of Cyprus that is also embroiling Greece and Israel.

The Turkish prime minister, Tayyip Erdogan, warned last week that he was ready to send warships to the area, both to escort Turkish aid convoys to the Gaza Strip and to monitor Cypriot and Israeli energy projects.

How far Turkey is prepared to escalate tensions will become clearer in coming days.

A Texas-based company, Noble Energy, is due to launch exploratory drilling south of Cyprus soon on behalf of the Greek Cypriots, who represent the island internationally and in the European Union.

Asked about those plans, Egemen Bagis, Turkey's EU minister, warned this month: "It is for this [reason] that countries have warships. It is for this that we have equipment and train our navies."

In the past, Turkey has proved ready to back its positions in maritime disputes with military muscle.

Why is Turkey involved? Ah, the "Cyprus Problem!" For those unfamiliar with the issue, here's brief recap:

The Cyprus dispute is the result of the ongoing conflict between the Republic of Cyprus and Turkey, over the Turkish occupied northern part of Cyprus. Initially, with the annexation of the island by the British Empire, the "Cyprus dispute" was identified as the conflict between the people of Cyprus and the British Crown regarding the Cypriots' demand for self determination. The dispute however was finally shifted from a colonial dispute to an ethnic dispute between the Turkish and the Greek islanders.[1] The international complications of the dispute stretch far beyond the boundaries of the island of Cyprus itself and involve the guarantor powers (Turkey, Greece, and the United Kingdom alike), along with the United States, the United Nations and the European Union.

With the invasion of 1974 (condemned by UN Security Council Resolutions as legally invalid), Turkey occupied the northern part of the internationally recognised Republic of Cyprus, and later upon those territories the Turkish Cypriot community unilaterally declared independence forming the Turkish Republic of Northern Cyprus (TRNC), a sovereign entity that lacks international recognition-with the exception of Turkey with which TRNC enjoys full diplomatic relations. After the two communities and the guarantor countries have committed themselves in finding a peaceful solution over the dispute, the United Nations have since created and maintained a buffer zone (the "Green Line") to avoid any further intercommunal tensions and hostilities. This zone separates the government-controlled south from the Turkish-occupied north.

So, Turkey, about to get screwed out of a pipeline deal, wants to be dealt into the Cyprus gas bonanza. And Turkey's involvement/claim is based on a UN-condemned invasion of Northern Cyprus under the assertion of protection of the rights of the Turkish Cypriots.

Naturally, the UN now urges yet another effort to "resolve" this matter, as set out here:


THE UNITED Nations yesterday appealed to all sides to tone down the rhetoric over oil and gas exploration and focus on the positives that a Cyprus solution could bring to the island and region.

Speaking after talks between the two leaders yesterday, UN special representative in Cyprus Lisa Buttenheim said: “It should be understood that natural resources, if they are discovered, would be for the benefit of all Cypriots - Greek Cypriots and Turkish Cypriots - under the framework of a federal united Cyprus.”

Buttenheim highlighted that the issue was not directly related to the negotiations and had not been discussed. She added: “The United Nations would appeal to all involved to resolve this matter in a peaceful manner and look beyond the issues to the potential benefits that a united Cyprus can bring to Cypriots and to the region.”

UPDATE: Turkey has announced a "blocking move" as set out here:


Tension between Turkey and Greek Cyprus is moving toward crisis in the eastern Mediterranean Sea with Ankara’s announcement of plans to send an oil and gas exploration rig to the already unstable area, accompanied by a warship. “We have accomplished all preparatory work. We are ready to finalize the agreement [with Turkish Cyprus] to begin the process and send our platform off the Cyprus coast,” a Foreign Ministry official told the Hürriyet Daily News on Sunday.
The statement followed news that Texas-based Noble Energy, operating under license from the Greek Cypriot government, had moved its drilling rig into position over the weekend. It is expected to start work soon on a block southeast of the island.
The Greek Cypriot initiative pushed Turkey and Turkish Cyprus to announce their own action plan in retaliation. Under the plan, the Turkish Petroleum Corporation, or TPAO, will be licensed by Turkish Cyprus to launch exploration and drilling activities in the disputed area. A senior Energy Ministry official was in Nicosia on Sunday to review the current state of agreement, which will likely be signed within days if the Greek Cypriot administration does not retreat from its position.
“We will be very cautious in this process; all our steps will be taken as retaliation and [in response] to Greek Cypriot moves,” the Foreign Ministry official said.

Just what the world needed, a new hot spot. One that screws up a major energy find.

Why can't we all just get along?

UPDATE2: Another summary of where things stand with more information of the Turkish status from Turkish naval blogger Devrim Yaylalı at Bosphorus Naval News in his post The Situation In The Eastern Mediterranean. He notes Russian involvement, too.
Posted by Mark Tempest at 9/18/2011 11:57:00 PM