Ships launching nuclear warhead-tipped missiles into our atmosphere and then . . . well, you won't be reading this. Or much of anything on a computer.

Of course, if we continue to develop our missile defense systems, then the threat described below is lessened, though, as the saying goes, "The bad guys only have to be lucky once." 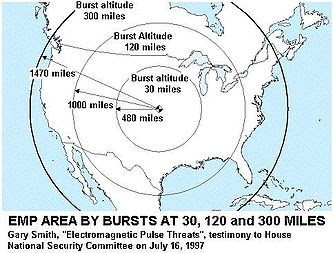 The electromagnetic pulse threat raised again at Iran and the EMP Threat:


The radicals ruling Iran have openly talked about it as they have called for the destruction of America and a new world order that excludes America. While pursuing their nuclear bomb project, the Revolutionary Guards of Iran have successfully test-launched a ballistic missile from a ship in the Caspian Sea. Recently, they also announced that all their vessels now have been armed with long-range ballistic missiles, and that soon they will start a mission in the Atlantic Ocean that extends into the Gulf of Mexico.

The Guards have also progressed with their missile program under the guise of a space project. Soon they will launch another rocket into space, this time carrying a 330-kilogram payload, a sign that they can now deliver a nuclear warhead to any point on Earth. The Guards have openly stated that the rocket used to launch the satellite can be shot parallel to the Earth’s orbit, which would transform it into an intercontinental ballistic missile.

I've been posting intermittently about this threat since 2005, see Yet Another Threat and Iran plans to knock out U.S. with 1 nuclear bomb or even 2009's EagleSpeak: Warning about EMP since 2005.

Heck we had a Midrats show on the topic - Fearless Navy Bloggers Take to the Air: Halloween Special -Episode 43 EMP Threat: Hype or Other? 10/31/2010:


Listen to internet radio with Midrats on Blog Talk Radio
It's always a good idea to get ready with that disaster kit, with water filters, etc. Works for natural disasters, too.
Posted by Mark Tempest at 9/12/2011 09:58:00 AM