Let me be the latest to warn that the weather soon will be improving in the upper Indian Ocean area and when the seas calm a bit, the Somali pirates will be out in force. Currently, a pirate action group or groups seems to be focusing in the lower Red Sea area (lots of islands to hide around) near the chokepoint of Bab el Mandeb. There are reports of Indian naval vessels interdicting pirates (see here, as well as the usual Iranian claims of rescuing most of the world from pirates, see here- "An attempt by the Somali pirates to hijack a Russian vessel was thwarted after an Iranian fleet of warships present in the region rushed to the scene. " - a "fleet?" - Really?).

Checking the wind conditions in the Gulf of Aden and the other areas most affected by pirates is pretty easy - along the right side of this blog I have the updates kindly put out by WeatherOnline. Based on the most recent reports, it looks as if the winds are dropping into safe conditions for pirate small boats operations.

You can view all NATO Shipping Center Somali Piracy Alerts here, but the most recent is: 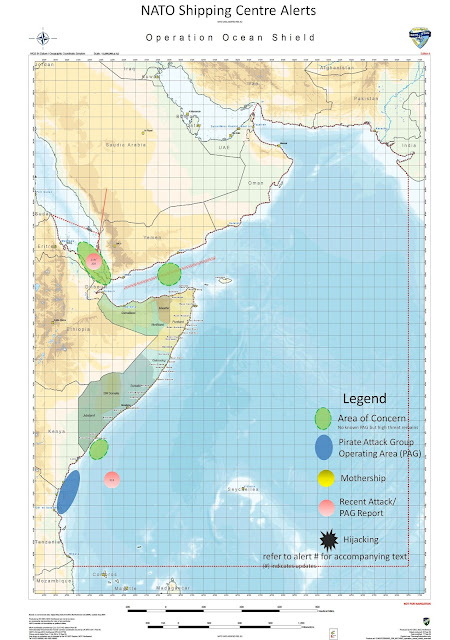 Alert number 220 / 2011 28/09/2011 11:40 14 03N 042 48E Attacked
---WARNING WARNING WARNING---
Alert number 220 / 2011.
At 1140 UTC / 28 SEP 11 / a merchant vessel has been attacked by skiffs in position 14 03 N 042 48 E
***This vessel managed to evade hijack***
***Vessel is SAFE***
The Pirate Attack Group is still in the area, and there have been reports that these skiffs have been involved in at least two other piracy attempts in the same region.
The lead boat of the group is described as a very fast white skiff.
While navigating in the Southern Red Sea and Bab al Mandeb regions, vessels are urged to operate at a heightened state of readiness, and implement Self Protective Measures in accordance with Best Management Practices Version 4 (dated August 2011). For further details, please see www.mschoa.org. or http://www.shipping.nato.int/Pages/BMP.aspx