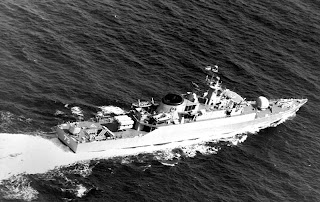 Something was making my "SWO sense"* tingle, and my humor alerts were ringing, and then, well then, I read this- Iran says could deploy navy near U.S. coast:


Iran raised the prospect on Tuesday of sending military ships close to the United States' Atlantic coast, in what would be a major escalation of tensions between the long-standing adversaries.

"Like the arrogant powers that are present near our marine borders, we will also have a powerful presence close to American marine borders," the head of the Navy, Rear Admiral Habibollah Sayyari said, according to the official IRNA news agency.

Speaking at a ceremony marking the 31st anniversary of the start of the 1980-1988 war with Iraq, Sayyari gave no details of when such a deployment could happen or the number or type of vessels to be used.

Arrogant SOB that I am, I was doing one of those rolling on the floor laughing demonstrations (which disrupted my workplace as you might guess).

This "announcement" (propaganda piece) just gets better as I read various analyes (e.g. here) of the proposed venture to the new world, many of take a more excited tone than I can about a fifth rate naval power venturing across the seas.

More. Later. Maybe much later, when the great "Iranian Caribbean Fleet" gets underway.