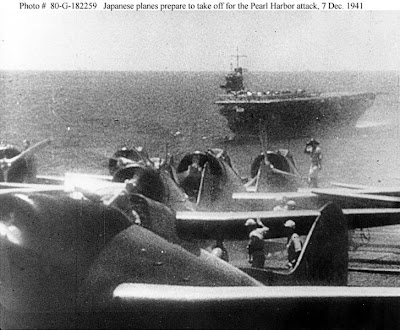 The Japanese carrier strike force, the Kido Butai, lead the attack at Pearl Harbor in 1941. Since then, the discussion about the attack and its ramifications has hardly paused. We offer up the latest iteration with Sunday's 5pm (Eastern U.S.) program on Midrats - Episode 101 Kido Butai at Pearl Harbor 12/11 :


A lot has been written about what went wrong at Pearl Harbor - a very American perspective.

If you are a neutral tactical or look at things from a Japanese perspective - there was a lot that went right at Pearl Harbor at the Tactical and Operational Level.

Join Sal from CDR Salamander and me as we discuss for the full hour many of the less understood aspects fo the attack on Pearl Harbor and the development in the Imperial Japanese Navy's tactical innovations with one of the co-authors of the article in December's Naval History magazine, Pearl Harbor's Overlooked Answer - Jonathan Parshall.

Mr. Parshall is one of the authors of the book, The Shattered Sword: The Untold Story of the Battle of Midway, a book highly recommended by many naval readers, including this one:


"I have begun reading Shattered Sword... and had to stop. It is too large, reads too well, contains too much information, and is too difficult to put down. Start it at your own risk! My congratulations to the authors and to Brassey's/Potomac Books for an excellent and valuable product."