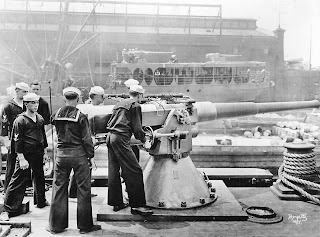 Reported here and as news at Safety at Sea Weekly:


The Panhellenic Seamen’s Federation announced yesterday that the bill “does not tackle piracy, nor protect seafarers, but instead raises the chances of mishaps and puts seafarers under psychological pressure”.

In a separate announcement, the Masters & Mates’ Union of the Greek Merchant Marine (PEPEN) said: “The content of the bill is unacceptable and leaves a ship’s master and crew exposed to danger.”
***
Under the proposal, up to six armed guards per ship, acting under the authority of the master, would be allowed on Greek-flagged ships serving routes outside its territorial waters.

There's just no pleasing some people.

Why would there be danger to the sailors? Well, consider this:


A self-described pirate in Somalia who gave his name as Bile Hussein said the arrests will lead to "trouble" for Indian sailors and ships.

Now, extrapolate from those threats to what the pirates are doing.

They have always known that the hostages they hold are one of the few reasons that the pirates have been allowed to survive - fear of them killing the hostage sailors they hold has stayed the armed fist of naval forces (including Marines). So, they reason, if we want to influence the policy makers of the countries who pose a threat to us, we should grab and hold their sailors to provide ourselves with leverage against the delivery of force against us.

It's a war. A nasty brutish sort of war as run by criminal gangs.

Perhaps the Greek sailors feel they don't want to run any additional risks of being long-term hostages.
Posted by Mark Tempest at 12/01/2011 11:04:00 AM