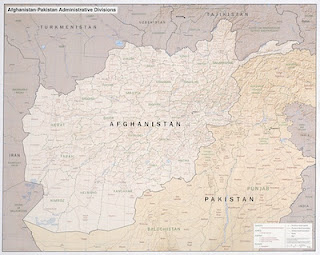 Following the confusion of the attack on a Pakistan border post (see here), the words continue to fly fast and furious, with the truth of what happened becoming less and less relevant.

The U.S. claims a couple of defenses in the incident, including an assertion by Afghan forces that they called in the airstrike.

"Whatever" - as the saying goes- the Pakistanis are not in the mood to listen to explanations. As the story notes,


Pakistan's army claims the attack was unprovoked and insists there was no militant activity in the area.

Meantime, Islamabad has closed its border to the trucks that deliver supplies to coalition troops and is demanding the U.S. vacate a base thought to be used for launching drones.


"I do not want there to be any doubt in the minds of any commander at any level about the rules of engagement," Chief of Army Staff General Ashfaq Kayani said in a communique on Friday.

"In case of any attack, you have complete liberty to respond forcefully using all available resources. You do not need any permission for this."

A military source explained that this amounted to a change in the rules for Pakistani forces guarding the Western border against militant movements to and from Afghanistan.

"In the past, we were only guarding ourselves or reacting against militants," said the source, who requested anonymity because he is not authorized to speak to the media.

An analysis of the potential impact of the closed Pakistani border can be found at Oilprice.com where reporter John Daly lays out the logistics issues posed by the Pakistan border closing in Furious at Latest U.S. Attack, Pakistan Shuts Down Resupply Routes to Afghanistan "Permanently",


So, what does this mean for logistical support of ISAF forces? According to Nesar Ahmad Nasery, the deputy head of Torkham Customs, around 1,000 trucks cross into Afghanistan on a daily basis, nearly 300 of which are NATO contractors carrying NATO supplies in sealed containers. Khyber Transport Association chief Shakir Afridi said that each oil tanker has a capacity of 13,000-15,000 gallons. In October 2010 Chairman of the Joint Chiefs of Staff Admiral Michael Mullen said that fossil fuels are the number one import to Afghanistan.

Noting the obvious, as Afghanistan has no indigenous hydrocarbon supplies, every drop must be brought in, with transit greatly increasing the eventual cost. For 2001-2008, almost all U.S. and NATO supplies were trucked overland to Afghanistan through parts of Pakistan effectively controlled by the Taliban.

As shown on the map from NPR and Transcom (Logistics into Afghanistan), the logisticians have come up with alternative routes - which Mr. Daly discusses in his report:


But NATO and the Pentagon have a backup plan – since 2009 they have been shifting their logistics to the Northern Distribution Network (NDN), a railway link running from Latvia’s Riga Baltic port through Russia and Kazakhstan terminating in Uzbekistan’s Termez on the Afghan border.

There is also another route, involving ships entering the Black Sea with several modal transfers. These alternative routes are much more costly. I suggest reading the excellent Oilprice.com piece for details.