In last week's Weekly Piracy Assessment, the NATO Shipping Center reported that the on-coming monsoon season in the Indian Ocean will impact piracy:


The NE monsoon has begun but tempered by a low pressure area in the region. As a result it is not likely to impede piracy activity in the near term. The monsoon is expected to go into full swing over the next couple weeks and, as weather deteriorates, piracy activity is likely to be hindered. 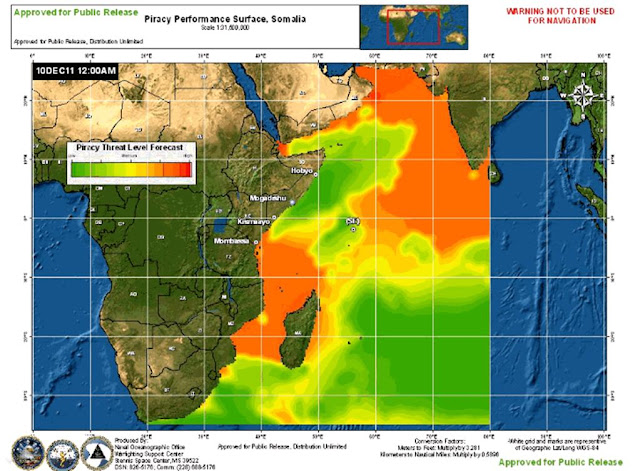 
4. DECEMBER 08 – DECEMBER 14
A. (U) GULF OF ADEN: Moderate winds and light seas (ENE 15 – 20, 2 – 4 feet) exist in the GOA and will continue through the next 72 hours. EXTENDED FORECAST: Expect ENE winds to continue through forecast period. A modest increase in sea heights will occur in the western half of the Gulf of Aden as 3 – 5 foot seas provide moderate impacts to small boat operations by 11 Dec.
B. (U) SOMALI COAST: Continued NE winds over the Somali Basin have increased sea heights from Socotra Island southwest to the Kenyan border. Expect high winds and seas (NE 20 – 25, 6 – 8 feet) to affect small boat operations through the next 72 hours. EXTENDED FORECAST: Winds and seas will remain prominent impacts to the area through 14 Dec as the NE monsoon fully sets in over the region.
C. (U) NORTH ARABIAN SEA: Light to moderate winds and seas (NE 12 – 16, 2 – 4 feet) in the North Arabian Sea will continue through the next 72 hours. EXTENDED FORECAST: A large portion of the NAS will continue to experience little to no impacts through 14 Dec. Expect a region just south of the Gulf of Oman to show increased sea heights (4 – 6 feet) by 13 Dec.
D. (U) INDIAN OCEAN: Residual seas from the Somali Basin will provide moderate impacts (3 – 5 feet) to the Kenyan and Tanzanian waters, while winds in the region vary in direction and remain mainly below 10 knots through the next 72 hours. Expect light winds and seas (ENE 8 – 12, 1 – 3 feet) in the sheltered waters of the Mozambique Channel through 11 Dec. EXTENDED FORECAST: Variable light winds and residual seas from the Somali Basin will continue to provide the only impacts to the Kenyan and Tanzanian waters through 14 Dec. Expect an increase in winds through the Mozambique Channel by 12 Dec to slowly increase seas in the southern portion. Moderate winds and seas (N 15 – 20, 3 – 5 feet) will affect the region by 13 Dec.

The PAWW weather forecast map suggests a potential decline in pirate activity due to the weather. See the map above.

But you can also look over the right, where the WeatherOnline charts appear constantly updating winds in the Somali pirate operating areas. Here's the 13 Dec 2011 winds:

Lots of 15+ knot winds out there except relatively near shore . . .

Weather takes its toll on the pirates, as reported by SomaliaReport "Six Pirate Groups, Six Boats Missing at Sea":


The number of pirate attacks off the Somali coast has declined considerably in recent weeks due to strong winds and storms with pirates reporting that at least six of their groups and six of their boats were lost at sea.

Before merchant ships get too cocky, remember that there have been plenty of attacks during the monsoon seasons over the years and the winds are much lower near the entrance to the Red Sea.

The NATO Shipping Center also has an updated "Pirate Action Group" map, putting PAGs in a couple of areas near lower reported winds: 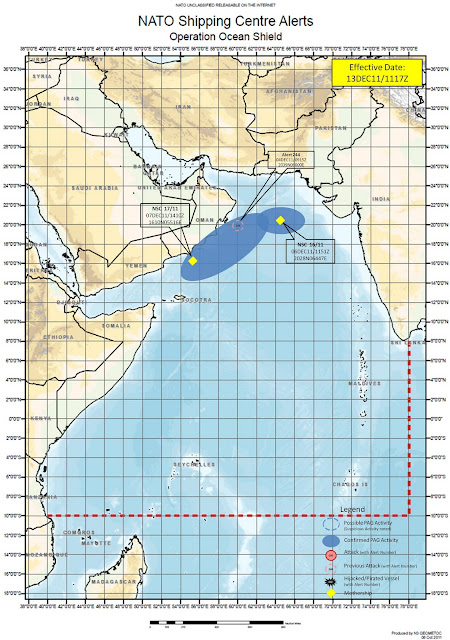