Energy: A Way to Mine Methane Hydrates for Natural Gas? 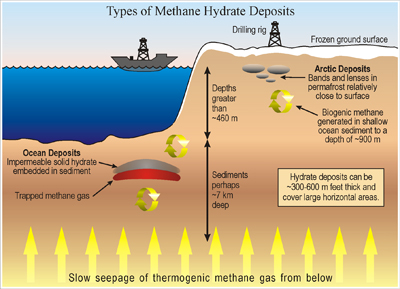 
U.S. Energy Secretary Steven Chu announced today the completion of a successful, unprecedented test of technology in the North Slope of Alaska that was able to safely extract a steady flow of natural gas from methane hydrates – a vast, entirely untapped resource that holds enormous potential for U.S. economic and energy security. Building upon this initial, small-scale test, the Department is launching a new research effort to conduct a long-term production test in the Arctic as well as research to test additional technologies that could be used to locate, characterize and safely extract methane hydrates on a larger scale in the U.S. Gulf Coast.

So, what the heck are "methane hydrates?" See here: 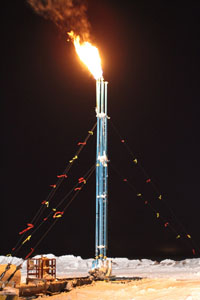 Methane hydrate is a cage-like lattice of ice inside of which are trapped molecules of methane, the chief constituent of natural gas. If methane hydrate is either warmed or depressurized, it will revert back to water and natural gas. When brought to the earth's surface, one cubic meter of gas hydrate releases 164 cubic meters of natural gas. Hydrate deposits may be several hundred meters thick and generally occur in two types of settings: under Arctic permafrost, and beneath the ocean floor. Methane that forms hydrate can be both biogenic, created by biological activity in sediments, and thermogenic, created by geological processes deeper within the earth.


Paleoclimatologists now believe that large scale, natural methane hydrate releases have been partly but significantly responsible for short-cycle global warming and global cooling cycles in the past. The recent discoveries in the Arctic, in fact, are thought to suggest that methane releases have contributed to the global warming that has occurred since the last ice age 15,000 years ago. [2]

The problem is that these methane releases have a strong positive feedback loop. As they increase the warming of the atmosphere that warming in turn increases methane release which in turn increases warming which in turn releases more...... You get the picture. Acceleration of global warming through this positive feedback loop, by increased methane concentration in the atmosphere, far more than CO2 concentrations, represents, to paleoclimatologists, a far greater risk of pushing us into the Venus effect, runaway global warming. 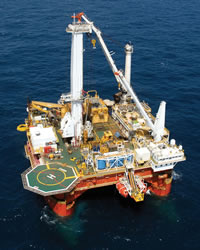 Additional research has been conducted in the Gulf of Mexico:


On May 6, 2009, the U.S. Department of Energy (DOE) National Energy Technology Laboratory (NETL)in collaboration with the U.S. Geological Survey (USGS), the U.S. Minerals Management Service, an industry research consortium led by Chevron, and others completed a landmark gas hydrate drilling expedition. The objective of the 21-day expedition was to confirm that gas hydrate can and does occur at high saturations within reservoir-quality sands in the Gulf of Mexico. This objective was fully met, with highly saturated hydrate-bearing sands discovered in at least in two of three sites drilled.

Gas hydrate is a unique substance comprised of natural gas (almost exclusively methane) in combination with water. Gas hydrate is thought to exist in great abundance in nature and has the potential to be a significant new energy source to meet future energy needs. However, prior to this expedition, there was little documentation that gas hydrate occurred in resource-quality accumulations in the marine environment.


Running out of energy, are we? Seems like we are not.