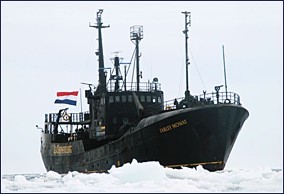 
THE controversial Sea Shepherd leader Paul Watson has apparently been arrested in Germany and could be facing extradition to the Central American nation of Costa Rica over the ramming and water-canon attack on a commercial shark fishing ship a decade ago.

Costa Rican media are reporting Watson, labelled an eco-terrorist for his anti-whaling campaigns, is facing attempted murder charges for ramming and then attacking the fishing ship as it was disabled and adrift.

Sea Shepherd asserts it's all a big misunderstanding of some sort. Their version is here:

When last heard from the vessel involved in this incident, Farley Mowat (pictured above), had been arrested by the Canadian government and then sold to cover a portion of its berthing fees.
Posted by Mark Tempest at 5/14/2012 11:27:00 AM