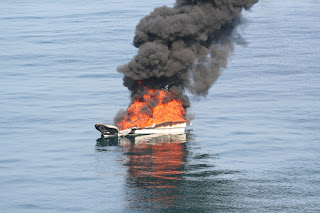 A three judge panel of the 4th Circuit out of Richmond, VA, is responsible for the news: "US appeals court clarifies piracy definition":


The court's ruling gives prosecutors wider latitude to go after people who attack U.S. vessels, U.S. Attorney Neil MacBride said. "For decades, the international community has considered violent attacks on the high seas as an act of piracy, and today's ruling will strengthen our ability to hold those who attack U.S. vessels by force accountable, regardless of whether they are successful or not," said MacBride, whose office handled both cases.

In one case, a lower court judge dismissed charges against five Somalis in an attack on the USS Ashland, ruling since the men had not taken control or robbed the ship their actions did not rise to the definition of piracy. The ruling sends that case back to U.S. District Court for trial, the government said.

In the other case, prosecutors convicted five Somali men who attacked the USS Nicholas. It was the first piracy conviction in a U.S. courtroom since 1819. The ruling by the three-judge panel of the 4th U.S. Circuit Court of Appeals upheld those convictions and the life sentences the men received.

You can take look at the decision by going here.

Or read them below:
US v. Dire and US v. Ali