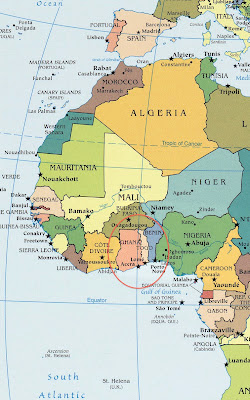 A Singapore-managed product tanker with valuable gasoline cargo has gone missing and is suspected to have been hijacked by pirates while at anchor off Lome, Togo, a maritime watchdog said Tuesday. Potengal Mukundan, director of the London-based International Maritime Bureau (IMB), told AFP international warships and navies from neighbouring countries have been alerted and are searching for the ship, which has 24 crew members and was reported missing by the operators Tuesday.
***
"Here we have criminal gangs whose main purpose is to steal multi-million cargo which is gasoline as it has a ready market. It is very easy to dispose of it. There has been an underground trade in the Gulf of Guinea for decades."

Mukundan said so far in 2012 there have been 19 attacks off the Gulf of Guinea on the west coast of Africa, with two vessels hijacked. Forty-two crew have been taken hostage, two crew members killed and two kidnapped by pirates.