They Said It Couldn't Be Done 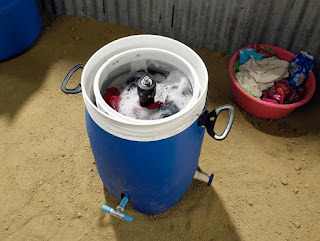 With a hat tip to Maritime Advocate Online, a short tale of an idea "that couldn't be done."

In this case, a bicycle made out of an unlikely material - Izhar cardboard bike project on Vimeo .

Which in turn recalls the old E.A. Guest poem It Couldn't Be Done:


Somebody said that it couldn’t be done,
But, he with a chuckle replied
That "maybe it couldn’t," but he would be one
Who wouldn’t say so till he’d tried.
So he buckled right in with the trace of a grin
On his face. If he worried he hid it.
He started to sing as he tackled the thing
That couldn’t be done, and he did it.

Somebody scoffed: "Oh, you’ll never do that;
At least no one has done it";
But he took off his coat and he took off his hat,
And the first thing we knew he’d begun it.
With a lift of his chin and a bit of a grin,
Without any doubting or quiddit,
He started to sing as he tackled the thing
That couldn’t be done, and he did it.

And a Grook by Piet Hein:

Our choicest plans
have fallen through,
our airiest castles
tumbled over,
because of lines
we neatly drew
and later neatly
stumbled over.

Sometimes you have to be open to looking at problems from a different angle. Sort of like the foot powered washing machine (pictured above) which may save thousands of work hours and improve health in some parts of the world where beating clothes on rocks is now the norm for washing.