It is all around us - from poor program decisions to significant budgetary stresses that are only recently starting to bite - the large US Navy Fleet straddling the globe is contracting.

What are the initial, second and third order effects of the decreasing presence of the US Navy. Is it permanent, relative, or can fewer numbers be made up in other ways? 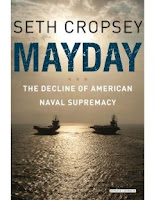 Join Sal from CDR Salamander and EagleOne of EagleSpeak in a wide ranging discussion along with their guest Seth Cropsey, Senior Fellow from The Hudson Institute and author of the new book, Mayday: The Decline of American Naval Supremacy.