They have been quiet recently - but you can't count them out, so Somali pirates are discussed this week on Midrats in Episode 170: "Stolen Seas: Tales of Somali Piracy": 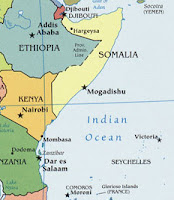 We have heard from industry, military leaders, Marines, and private security providers, this Sunday we are going to look at piracy at a more personal level with director Thymaya Payne of the documentary, "Stolen Seas: Tales of Somali Piracy."

He will be our guest for the full hour.

From the show promo:

The filmmakers have spent the past three years traveling to some of the world's most violent locales in order to make this documentary on Somali piracy, Stolen Seas. Utilizing exclusive interviews and unparalleled access to real pirates, hostages, hostages' relatives, ship-owners, pirate negotiators and experts on piracy and international policy, Stolen Seas presents a chilling exploration of the Somali pirate phenomenon.

The film throws the viewer, through audio recordings and found video, right into the middle of the real-life hostage negotiation of a Danish shipping vessel, the CEC Future. As the haggling between the ship's stoic owner Per Gullestrup, and the pirate's loquacious negotiator, Ishmael Ali, drags on for 70 days, these two adversaries' relationship takes an unexpected turn and an unlikely friendship is born.
Stolen Seas is an eye opening refutation of preconceived ideas on how or why piracy has become the world's most frightening multi-million dollar growth industry.