Just the other day, the "safe sign" in the current North Korea flail was that they NORKs had not closed down the Kaesong Industrial Park, as was mentioned here.


North Korea is blocking the entry of South Korean workers into a joint industrial zone, in a move seen as further escalating tensions.

And, then, of course, is the news that the DPRK has threatened to "restart" and old nuclear plant, or as The Chosun Ilbo puts it, "N.Korea Vows to Restart Nuclear Reactor":


North Korea on Tuesday threatened to restart a nuclear reactor it shut down under an international agreement in 2008, which would enable it to produce more nuclear weapons-grade plutonium.

"We are taking action to refurbish and reactivate the reactor together with all other nuclear facilities in Yongbyon including a uranium enrichment plant," the North's official KCNA news agency cited a spokesman for the General Department of Atomic Energy as saying. 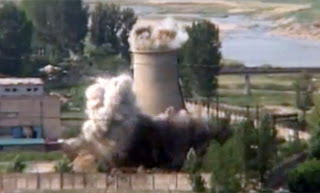 
In a highly publicized stunt, the North blew up the cooling tower at the 5MW Yongbyon nuclear reactor in June 2008 as part of its pledge to scrap the nuclear facility.

Liars and cheats. And would-be bullies.

The U.S. has put a ballistic missile defense destroyer in the vicinity and is moving the x-Band radar thingie nearer (or something). UPDATE: Movement of the X-Band Radar Platform "not tied to North Korea threat."

It's why we have a Navy and a BMD program.


. . .Mr. Kim is manufacturing a crisis to secure high-level talks with the U.S., as his father and grandfather did.

Since American negotiators would be portrayed as supplicants at the court of the brilliant young general, talking about the North's nuclear and missile programs would shore up his legitimacy. And once the U.S. is drawn in, it will come under Chinese pressure to pay off the Kims in another deal the North has no intention of honoring.