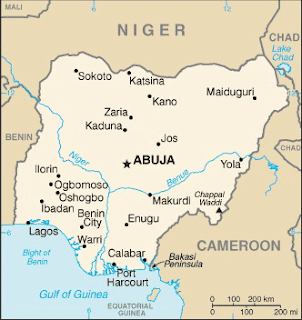 Radical Islamist forces in Nigeria make it another one of those places on the list "places most likely to need intervention in the future" because of Al Qaeda influences, as set out in this NYTimes piece by Adam Nossiter "In Nigeria, Ansaru Militant Group Poses New Threat". The article features a charming interview with a leader of the AQ-inspired movement "Ansaru" who has a "special" agenda:


Having split off from Boko Haram — the dominant Nigerian extremist group responsible for weekly shootings and bombings — this new group, Ansaru, says it eschews the killing of fellow Nigerians.

“Too reckless,” said a young member of Ansaru. His group evidently prefers a more calculated approach: kidnapping and killing foreigners.

Just days before, his group had methodically killed seven foreign construction workers deep in Nigeria’s semidesert north. The seven had been helping to build a road; their bodies were shown in a grainy video, lying on the ground.

The West, which has often regarded the Islamist uprising here as a Nigerian domestic issue, has been explicitly put on notice by Ansaru, adding an international dynamic to a conflict that has already cost more than 3,000 lives.
***
For three hours, with chilling precision, Abu Nasir, in a neatly pressed shirt and polished shoes, laid out Ansaru’s philosophy, after reciting a verse from the Koran promising “hellfire” for nonbelievers: opponents would be killed; Qaeda sympathizers were everywhere in Nigeria; and Westerners would be kidnapped.

He said Ansaru had been motivated by Al Qaeda itself, trained by its affiliate in the region — Al Qaeda in the Islamic Maghreb — and was now following in both their footsteps. Of course, as Max Boot discusses here, Ansaru is moving on the "public opinion" part of any insurgent force - getting publicity that far exceed its numbers and potential to do harm to the West/non-Muslim world.

What next? Drones over Nigeria?

I don't care what the alleged motivation of Ansaru is, I suspect oil money (and damaging the West's economy) is a factor in why AQ is pushing this.