An article in the Oil and Gas Journal put me on to this fascinating saga from the American Oil and Gas Historical Society, 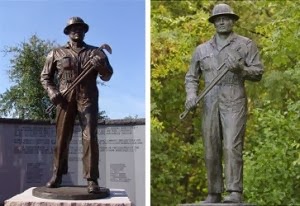 
Two bronze statues separated by the Atlantic Ocean commemorate the achievements of World War II American roughnecks. The first stands in Dukes Wood near the village of Eakring in Nottinghamshire, England. Its twin greets visitors at Memorial Square in Ardmore, Oklahoma.

The seven-foot bronze statues, separated by more than 2,400 miles, commemorate 44 Americans who – during a critical time during the war – produced oil. They drilled in Sherwood Forest.

So, the Brits sought some American help and got 44 oil field workers ("roughnecks" in U.S. oil field terms), whose efforts helped create an "unsinkable tanker" during Britain's hours of great need for oil and its products to fight and to survive the war which had been raging for 3 years . . .


Using innovative methods, the Americans drilled an average of one well per week in Duke’s Wood, while the British took at least five weeks per well.

Submarine warfare, an American oil roughneck buried in a military cemetery in England and all of it a secret . . .

Read it all, it's a great story that ought to be more widely known.