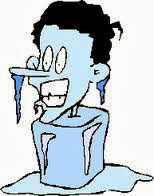 I was watching television the other day when one of the characters got dunked in water and then began running into the woods on a cold day. The plot point was that this child was going into "hypothermia." "Well," I asked myself, "how long does it take to go from being okay to hitting that hypothermic wall?"

The short answer is "not all that long."

What is hypothermia? From the Center for Disease Control, hypothermia


When exposed to cold temperatures, your body begins to lose heat faster than it can be produced. Prolonged exposure to cold will eventually use up your body’s stored energy. The result is hypothermia, or abnormally low body temperature. Body temperature that is too low affects the brain, making the victim unable to think clearly or move well. This makes hypothermia particularly dangerous because a person may not know it is happening and won’t be able to do anything about it.

Hypothermia is most likely at very cold temperatures, but it can occur even at cool temperatures (above 40°F) if a person becomes chilled from rain, sweat, or submersion in cold water.

Can vigorous exercise stop hypthermia? Sure, up to the point where you stop and your sweat begins to cause a chilling effect. After running a marathon in freezing weather I couldn't seem to get warm fast enough. Knowing what I know now, I would have changed to dry clothes much quicker than I did. 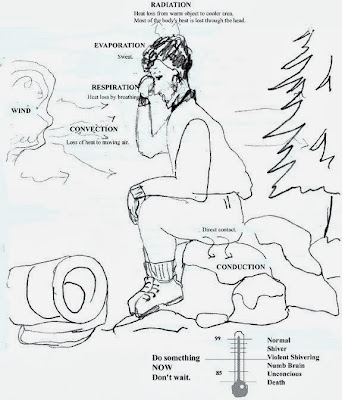 Hikers, bikers, wood choppers, sledders, skiers, and people doing heavy work outdoors in the winter need to be careful. Remember, it does not need to be 12 below before you need to be watchful for hypothermia.

Great graphic on how you lose heat from WinterCampers.com, which also has an interesting blog post on The Truth About Heat Loss Through Your Head which may shatter some beliefs you might hold.

As you may have noted above, alcohol is not a preventative for hypothermia, despite the fact it may make you feel warmer - it can actually be the cause of heat loss. Why? See here:


As the Director of Clinical Pharmacology at the University of Iowa, Dr. William Haynes, states, “Consumption of alcohol undoes many of the human body’s healthy reflexes, one of which is keeping the core body temperature warm in cold weather.” It doesn’t even take that much for this effect to kick in. Even just one alcoholic drink will start the process that results in a lowered core body temperature.

So how does it do this and why does drinking alcohol make you feel warmer, even though you actually are getting colder? Alcohol is a vasodilator, meaning that it causes your blood vessels to dilate, particularly the capillaries under the surface of your skin. Thus, the volume of blood brought to the skin’s surface increases, making you feel warm. As Dr. Haynes mentioned, this overrides one of your body’s defenses against cold temperatures, constricting your blood vessels, thereby minimizing blood flow to your skin in order to keep your core body temperature up.

While you may feel warmer from the extra blood warming your skin (where most of your “heat sensors” are located), this blood being brought close to the surface of your skin will be rapidly cool if you are in a cold environment (sometimes exacerbated by sweating as a result of this heat flush). The net effect being a rapid drop in core body temperature, often without you even realizing it as your skin will feel fairly warm, which makes it doubly dangerous to drink alcohol in extremely cold weather. 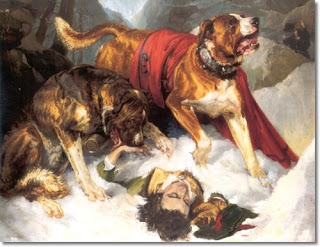 Those tales of mountain rescue dogs with a small barrel of booze around their necks? Sounds cool, but not really a help to a freezing person. As it turns out, the "brandy keg" thing seems to be another myth and the main benefits provided by the large dogs is finding victims, barking for attention and lying beside a freezing person to warm them up.


- Cover. Wear a hat or other protective covering to prevent body heat from escaping from your head, face and neck. Cover your hands with mittens instead of gloves. Mittens are more effective than gloves because mittens keep your fingers in closer contact with one another.
- Overexertion. Avoid activities that would cause you to sweat a lot. The combination of wet clothing and cold weather can cause you to lose body heat more quickly.
- Layers. Wear loosefitting, layered, lightweight clothing. Outer clothing made of tightly woven, water-repellent material is best for wind protection. Wool, silk or polypropylene inner layers hold body heat better than cotton does.
- Dry. Stay as dry as possible. Get out of wet clothing as soon as possible. Be especially careful to keep your hands and feet dry, as it's easy for snow to get into mittens and boots.
***
The American Academy of Pediatrics suggests the following tips to help prevent hypothermia when children are outside in the winter:

- Dress infants and young children in one more layer than an adult would wear in the same conditions.
- Limit the amount of time children spend outside in the cold.
- Have children come inside frequently to warm themselves.

More from the Forest Service here. Some of this will apply when camping but may also come into play following a disaster:

First Line Of Defense: Avoid exposure, stay dry, BE AWARE OF THE WIND, understand and don’t underestimate the cold.

Second Line Of Defense: Terminate exposure get out of the wind and the rain, and build a fire.

Third Line Of Defense: Watch yourself and others for the symptoms listed above.


What about frostbite? Mayo Clinic says:


Frostbite occurs when the skin and body tissue just underneath it freezes. Your skin becomes very cold, then numb, hard and pale. Frostbite typically affects smaller, more exposed areas of your body, such as your fingers, toes, nose, ears, cheeks and chin.


- Limit time you're outdoors in cold, wet or windy weather. Pay attention to weather forecasts and wind chill readings. In very cold, windy weather, exposed skin can develop frostbite in a matter of minutes.
- Dress in several layers of loose, warm clothing rather than a single layer. Air trapped between the layers of clothing acts as insulation against the cold. Wear windproof and waterproof outer garments to protect against wind, snow and rain. Choose undergarments that wick moisture away from your skin.
- Wear a hat that fully covers your ears. Heavy woolen or windproof materials make the best headwear for cold protection.
- Wear mittens rather than gloves, which provide better protection.
- Watch for signals of frostbite. Early signs of frostbite include redness, prickling and numbness.
- Plan to protect yourself. When traveling in cold weather, carry emergency supplies and warm clothing in case you become stranded.
-Don't drink alcohol if you plan to be outdoors in cold weather. Alcoholic beverages cause your body to lose heat faster. Eating well-balanced meals and drinking warm, sweet drinks, such as hot chocolate, will help you stay warmer.

Keeping your skin dry is very important - hence the suggestion for undergarments that "wick" moisture away. I was once involved in a winter hike in which I was wearing, for reasons that elude me now (probably related to college-age stupidity and a low bank account) was wearing a pair of "insulated rubber boots" (Pac boots) which trapped sweat from my feet in the boot (and your feet have lots of sweat glands). Only frequent changes of socks saved my very cold toes from serious damage. This sort of boot was responsible for some frostbite injuries during the Korean War. See here:


For those who are not familiar with them, the "shoe-pac" was a leather boot top with lacing and with a rubber foot, like a heavy conventional "rubber." It was very poorly designed for cold weather operations. Two pairs of one-half inch thick flat felt inserts, or soles, were issued with each pair of boots; one pair of the inserts was to be placed on the bottoms in each boot, and the other pair was to be placed next to the skin, generally one under each armpit, along with a pair of wool socks. The felt inserts in the boots were supposed to capture the moisture from foot perspiration, and at the end of the day the wet inserts and the wet socks worn that day were to be exchanged with the dry items under the armpits. Body heat would dry the wet inserts and socks over the next twenty-four hours.

This design was not suitable for the combat infantryman's use, particularly for the conditions we were exposed to during November and December 1950 in the Chosin Reservoir campaign.

Rifle platoons were the eyes and ears, and fingers, of the larger units, constantly patrolling, looking and feeling for the enemy. For example, not a day passed between 10 November and 7 December when I was evacuated that my platoon was not involved in a lengthy patrol action, frequently involving contact and combat with our Chinese enemy. The weather was extremely cold, most days below zero degrees Fahrenheit. Between 26 November and 7 December temperatures dropped to 20 to 30 degrees below Fahrenheit. We walked up and down rugged mountains, not too unlike the higher Alleghenies in West Virginia and Pennsylvania in the deep winter. The ground was covered with snow twelve to twenty inches deep.

During combat patrols or in movement to contact operations, our feet would perspire profusely in our rubber-bottomed boots as we walked. Then, for combat, we would be forced to stop, lie on the snow-covered ground, engage in combat and then get up and move again, repeating this activity many times over during the day, and often times, nights and around the clock. During stopped periods our bodies and our feet would be immobilized, and one could actually feel the inserts freezing in the boots. Under these conditions, wiggling the toes in the boots did little to restore circulation, or prevent further freezing. This type of activity resulted in a cycle of repeated freezing and thawing of the feet within the boot.

Quite frequently after stopping for the night and preparing our night defensive positions, we would remove our boots and literally "peel" the frozen inserts from our boots like pulling cheesecloth from a round of cheese. Under these circumstances the daily changing of felt inserts and socks was mostly ineffective, particularly for the Marine infantryman in the rifle platoon.

This type of boot might be okay for short duration jaunts into winter weather or with really good socks and liners that keep the feet dry or with regular sock changes. Personally, I try to find boots that breathe and socks that wick.