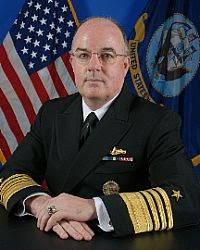 
In less than a month we will be firmly in the middle of the 2nd decade of the 21st Century. What path were we put on at the start 21st Century that got us here? How do we evaluate the right decisions, the neutral decisions, and the less than optimal calls of the last decade and a half? What lessons can we take away now in order to make decisions to best position the Navy on the approaches to 2030?

Our guest for the full hour this Sunday to discuss this an much more will be Admiral John C. Harvey, Jr, USN (Ret).

Almost a year since he joined the retired ranks, when in uniform Admiral Harvey was one of the of the more engaged, visible, and accessible Flag Officers of his generation - and in retirement he continues to be an influential voice.

Admiral Harvey was born and raised in Baltimore, MD and is a 1973 graduate of the U S Naval Academy.

He commanded the USS DAVID R RAY (DD 971), the USS CAPE ST GEORGE (CG 71), the THEODORE ROOSEVELT Strike Group/CCDG-8 and also served as the Navy’s 54th Chief of Naval Personnel and as the Director, Navy Staff.

Prior to his retirement from the Navy in November, 2012, Admiral Harvey served as Commander, US Fleet Forces Command. He now makes his home in Vienna, Virginia where he resides with his wife, Mary Ellen.