A Repeated Note on a Call for Small, Numerous Ships

Way back in 2008 we were discussing the shaping of the U.S. Navy fleet at The Time is Right for Revolution and the links therein. Part of that discussion follows:

CDR Salamander's Maritime Strategy Monday: the Revolt of the Commanders ought to stir up discussion - though I am not sure how many "flag bound" O-6s are reading blogs critical of the group think that has put us where we are. I do know that when on exercises it was common to acknowledge that some issues were "too hard" or "too time consuming" to let them dominate the exercise, though in real life one will not be able to "assume away" such problems.

In my view, during my last days being involved with such matters, we were not training senior officers in how to fight and how hard that fighting is against a determined enemy who has had time to build forces designed to exploit your well-known weaknesses.

So when CDR S calls for a "commander's revolt" I understand his frustration. And note that John Boyd paid for his revolution heavily while lesser men gained from his insight. The would-be revolutionaries need to understand the risks. 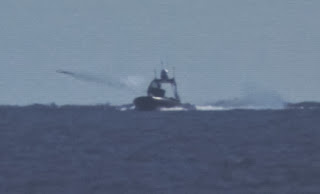 These commanders need some political help from someone who understands that we shouldn't have billion dollar ships doing missions poorly that could be done better by having many more mission-designed ships. To use a famous Navy phrase, "any ship can be a mine sweeper once." Real minesweepers can be reused after they have swept a channel- multibillion dollar "capital ships" cannot.

Given the promise of "network centric warfare," merely connecting a few huge platforms under-utilizes the potential for linking many small ships for greater tactical flexibility. Or, as Captain Wayne Hughes writes in Fleet Tactics and Coastal Combat (p.286):


We have seen that the number of ships is the most valuable attribute that a fleet can have. We also saw that many small ships offer more tactical flexibility... The U.S. Navy is composed of large, highly capable ships, many of which have area defense capability. It was for defense more than for offense that the American navy sacrificed numbers for quality.*

The asterisk is to his footnote:


Another reason is because of the economies of scale. A large ship with three times the displacement of a small one will have three or more times the payload and probably only cost twice as much. Sometimes the ship must be big to carry and operate its payload, modern carrier aircraft illustrate. A large ship is also more comfortable for long cruises in many kinds of weather.

Hughes needs to be listened to. Sometimes the economies of scale and crew comfort need to be weighed against other factors, like winning wars and not being afraid to send your expensive ships into harm's way. 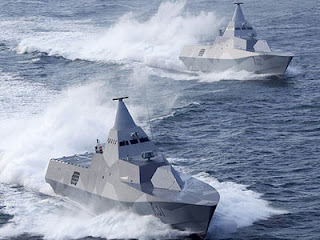 Where are we five years on? We are still having the same discussion - albeit the number of Littoral Combat Ships (more properly, "Littoral Drone Carriers" or LDCs) is growing. Exactly where the vast drone force is right now is unclear, though drones ought to be cheaper and easier to build in most ways - just turn the job over to robots as GM has done to most of its automobile manufacturing.

Smaller, faster, cheaper and dispersed in the theater where that matters (Southeast Asia) ought to be the U.S. Navy mantra for the next few months and years.

Not to the exclusion of the big gray hulls - as an adjunct force, not a replacement.