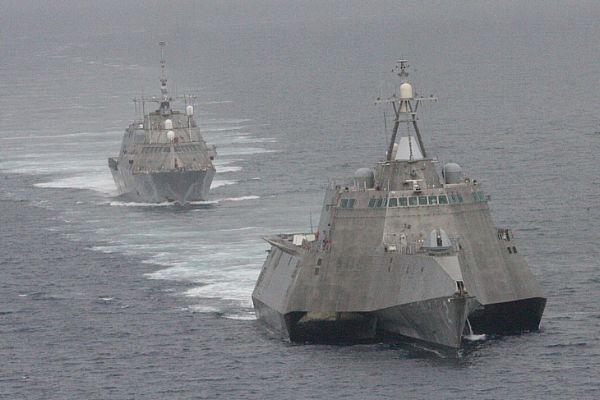 
Rowden [Rear Adm. Thomas Rowden, director of surface warfare], who has been locked away in for the wargames in the frigid New England wintry spring weather, took time to chat exclusively to Aviation Week about LCS’ performance thus far in the mid-2020s scenarios.

Stated simply, he says, the LCS give enemy fits.

“They are aware of where the carriers and amphibs are,” he says. “They had no of where the LCS was. They can give the enemy a helluva hard time.”

The LCS, he says, could swing out from the group, nearly unobserved, and deliver a sneak attack with missiles that can hit a target 120 to 130 nautical miles away. There are missiles now, he says, available or in development, that the Navy is confident will work with the ships.

LCS concept of operations, or conops, really open up, he says, when they are paired with other ships, like guided-missile DDG destroyers or Joint High Speed Vessels.

The LCS-DDG mating was particularly devastating, he says, for antisubmarine warfare (ASW). “The whole is significantly greater than its parts,” he says, combining three helicopters and an unmanned vertical lift aircraft.

Also, he says, LCS could be tasked to do some destroyer-type missions to free up the DDGs for other jobs.

Essentially, he says, when used the correct way – the way the ships were envisioned -- they can take a punch and deliver one.

“Are they lethal and survivable? Absolutely.”