Pirates: Not Dead Yet

According to the Office of Naval Intelligence Piracy Analysis and Warning Weekly (PAWW) Report for 27 February – 5 March 2014 there still be pirates out there attempting things:


1. (U) OMAN: On 6 March, three suspicious white skiffs approached a merchant vessel near position
22:27.1 N - 060:29.2 E, approximately 122 nm southeast of Muscat, Oman. The skiffs with two persons onboard each skiff approached the ship to within a half mile. After self protection measures were initiated by the crew, the
skiffs moved away. (NATO Shipping Centre)
2. (U) PAKISTAN: On 28 February, suspected pirates in a skiff chased an underway Bangladeshi-flagged bulk carrier, MV CRYSTAL GOLD near position 24:33 N – 062:44 E, approximately 40 nm southeast of
Gwadar, Pakistan. The pirates reportedly chased for up to four hours. The vessel took evasive measures as outlined in BMP 4, reported the incident to UKMTO, and headed towards the Pakistani coast. The Pakistani
Navy deployed a naval asset which located the skiff and detained the suspected pirates. The vessel's owners said there were 23 Bangladeshi crewmen on their vessel. (IMB, The Daily Star (Bangladesh), The New
Nation (Bangladesh)
3. (U) RED SEA: On 3 March, pirates approached an Iranian-flagged tanker near the Bab al Mandeb Strait, in the southern Red Sea. Iranian Navy Commander Rear Admiral Habibollah Sayyari told reporters that the
armed pirates attempted to attack the ship twice and that Iranian Naval forces thwarted the attacks. (Fars News Agency)

and in the Gulf of Guinea:


U) Kidnapping:
(U) NIGERIA: On 4 March at approximately 0130 local time, pirates boarded the Nigerian-flagged offshore supply vessel PRINCE JOSEPH 1 and kidnapping three crewmembers near position 04 17 N - 007 53 E,
Bight of Bonny, off Akwa Ibom State. After the pirates departed the vessel, the remaining crewmembers sailed to the port of Onne. (www.news.odin.tc)
***
(U) Vessels Fired Upon/Attempted Boardings:
(U)
NIGERIA: On 4 March, armed pirates attempted to board an underway bulk carrier near position 04:00 N–005:16 E, approximately 60 nm west-southwest of Brass. The pirates in two skiffs chased and fired upon the 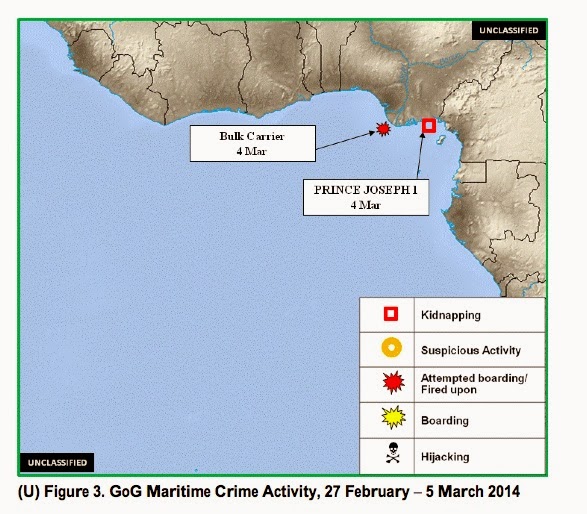 vessel during the attempted boarding. The vessel raised the alarm and non-essential crew mustered in the citadel. Master increased speed, took evasive maneuvers and sent SSAS alert. Due to the hardening measures
taken by the Ship’s Master the pirates aborted the attempted attack and moved away. The vessel sustained damage due to bullets striking the accommodation area. 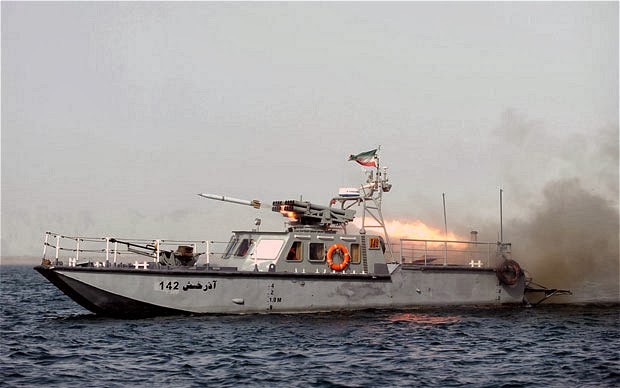 
Commander of the Iranian Navy says the country’s naval forces have thwarted over 150 pirate attacks on Iranian merchant vessels and oil tankers in the past four years.

“Over the past four years, the Islamic Republic of Iran Navy warships have escorted some 2,000 merchant vessels and freighters…and provided full security for the passage of Iranian vessels in a way that pirates have been unable to mount an attack on our ships,” Rear Admiral Habibollah Sayyari said on Thursday.

He added that Iranian naval forces arrested a number of pirates in four occasions.