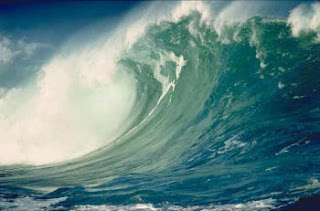 Yes, there are real world disasters aplenty, but sometimes it is good to take a step back and look at the more remote events. One of these, popular in movies from the late 1990's was the threat from asteroids smacking us and causing the "end of the world as we know it" (see here).

Behind these movies there is some truth. Things from outer space have collided with the earth. Under current theories, the fact that dinosaurs no long roam the earth is perhaps the result of one such collision or perhaps not.

WHat about the question "If an asteroid hits the earth could man survive?"

According to this article, from the NYTimes,"Did an Asteroid Impact Cause an Ancient Tsunami?", the answer might be - "Yes, under the right circumstances. In fact our ancestors may have already survived at least one such incident."


A large asteroid or comet, the kind that could kill a quarter of the world’s population, smashed into the Indian Ocean 4,800 years ago, producing a tsunami at least 600 feet high, about 13 times as big as the one that inundated Indonesia nearly two years ago. The wave carried the huge deposits of sediment to land.

Most astronomers doubt that any large comets or asteroids have crashed into the Earth in the last 10,000 years. But the self-described “band of misfits” that make up the two-year-old Holocene Impact Working Group say that astronomers simply have not known how or where to look for evidence of such impacts along the world’s shorelines and in the deep ocean.

Scientists in the working group say the evidence for such impacts during the last 10,000 years, known as the Holocene epoch, is strong enough to overturn current estimates of how often the Earth suffers a violent impact on the order of a 10-megaton explosion. Instead of once in 500,000 to one million years, as astronomers now calculate, catastrophic impacts could happen every 1,000 years.

So, 4800 years ago? Humankind certainly around (see here) and is still around, so it should be clear that humans can survive asteroid strikes and the tsunamis they can cause, if in fact the theory of the event described in the NYTimes piece proves to be correct.

On the other hand, big tsunamis ("megatsunamis") - whatever their cause- suggests that one good form of disaster prep is to move away from that lovely beach front property.

Now you have been warned. Or, as the U.K. Express put it Scientists predict MEGA-TSUNAMI twice the size of Big Ben to wipe out entire CITIES: A MEGA-TSUNAMI of biblical proportions presents a real threat to humanity today, scientists have warned.


UPDATE: On the other hand, a mega tsunami might just solve the issues involving the artificial islands in the South China Sea.
Posted by Mark Tempest at 10/28/2015 11:38:00 AM