Freedom of Navigation in the South China Sea 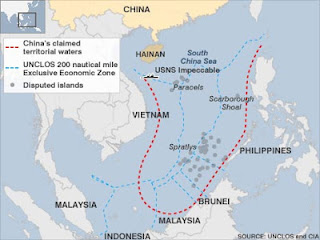 
..[W}hether the Pentagon decides to operate within 12 nautical miles of only those Chinese features that were previously reefs, or opts to transit near other Chinese artificial islands too, it should conduct FONOPS around other claimants’ features as well, including low-lying reefs that are controlled by the Philippines or rocks held by Malaysia or Vietnam. Given that these countries are themselves gravely concerned about freedom of navigation and have expressed a willingness to sign on to recent U.S. diplomatic proposals to halt destabilizing activities in the South China Sea, it is unlikely that they would object to inclusion in this demonstration of legal principle.

An important issue is presented in the piece in that FON is not the only issue in play. The underlying issue is sovereignty over the areas in question and the impact that has on carrying out operations in addition FON. As the article notes,


. . .[U]nder UNCLOS’ principle of innocent passage, foreign navies are entitled to transit within a state’s 12-nautical-mile territorial sea, as long as that vessel does nothing that is prejudicial to peace. (emphasis added)

If China is actually claiming that these artificial islands are the basis for some claim of "territorial sea" (which would not be consistent with international law) it could also assert that some actions of a transiting ship or fleet are "prejudicial to peace" and take steps to stop such actions.

Email ThisBlogThis!Share to TwitterShare to FacebookShare to Pinterest
Labels: Fun with China