North Korea Threatens Preemptive Suicide If It Doesn't Get Its Way 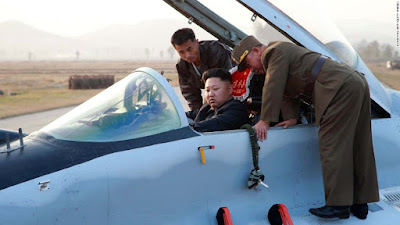 Well, it's not so much what the headlines say (as in "DPRK warns of preemptive strikes as U.S.-South Korea war games kick off" or "Pyongyang threatens pre-emptive nuclear strike on US-South Korea military drill",) but more what the effect of such strikes would be on the brutal dictatorship of the current Kim-in-Power (KIP).


North Korea has yet again threatened to mount a pre-emptive nuclear strike on the US-South Korea joint military exercise, which is set to kick off on 22 August. Tens of thousands of South Korean and American troops are already in the Korean peninsula to take part in the two-week-long annual drill.

Pyongyang views the military exercise termed Ulchi Freedom Guardian as a rehearsal for an actual attack on the North. It said that a nuclear war may "break out any moment" given the volatility in the Korean peninsula.

"They should properly know that from this moment the first-strike combined units of the KPA keep themselves fully ready to mount a preemptive retaliatory strike at all enemy attack groups involved in Ulchi Freedom Guardian," Pyongyang's state-run Korean Central News Agency (KNCA) said in its latest dispatch.

It added that Washington and Seoul "should bear in mind that if they show the slightest sign of aggression on (DPRK's) inviolable land, seas and air ..., it would turn the stronghold of provocation into a heap of ashes through Korean-style preemptive nuclear strike".

Perhaps Kim is looking for more aid to feed his ever hungry population and is, once again, resorting to nuclear blackmail. Whatever his reasons, he undoubtedly knows any act on his part will spell the doom of both his country and, more to the point, of him and all his minions.