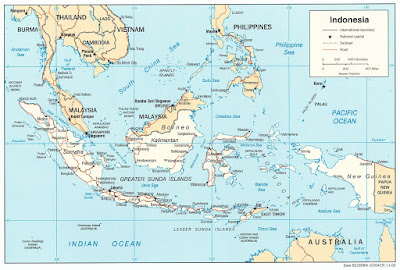 The asphalt and bitumen product tanker Ad Matsu was attacked by pirates in South China Sea on 15 nautical miles north off Tanjung Berakit, Indonesia. The vessel was en route from Singapore to Hai Phong, Vietnam, but near the island Pulau Bintan was reached by fast boat from the starboard. Six armed men succeeded to board the vessel and took control of the tanker. The crew was locked in the mess room, while pirates robbed the vessel and stole all the cash and valuables of the seamen. After robbery the pirates abandoned the vessel and fled away to Malaysia. There were no injured seamen from the product tanker Ad Matsu during the piracy attack. The crew reported about the accident and vessel returned in operations.

The Indonesian Navy found and arrested one of the pirates in large scale anti-piracy operation. The young man was arrested and will be investigated and judged for piracy according to the Indonesian laws.


Fishing "piracy" off Somalia seems to be back as reported by the Australian Broadcasting Corporation in As piracy is contained, Somali fishermen again compete with illegal vessels in their waters:


When the horn of Africa's infamous pirate gangs first emerged two decades ago, they were Somali fishermen arming themselves to fight off illegal fishing boats from other parts of the world.

International patrol vessels now guard Somalia's coastline making the waters relatively safe. The pirates are gone but that's created the opportunity for illegal fishing activity by Asian and European interests. Once again these high seas trawlers are competing with the locals and there are fears tensions could again escalate.

Not so sure the "pirate gangs" were all that innocent in the old days . . . on the other hand some Somali warlords were licensing fishing boats to operate in Somali waters to the detriment of Somali fishermen. See The Two Piracies in Somalia: Why the World Ignores the Other? by Mohamed Abshir Waldo:

In arrangements with Somali warlords, new companies were formed abroad for bogus fishing licensing purposes. Jointly owned mafia Somali-European companies set up in Europe and Arabia worked closely with Somali warlords who issued them fake fishing “licenses” to any foreign fishing pirate willing to plunder the Somali marine resources. UK and Italy based African and Middle East Trading Co. (AFMET), PALMERA and UAE based SAMICO companies were some of the corrupt vehicles issuing such counterfeit licenses as well as fronting for the warlords who shared the loot.

Among technical advisors to the Mafia companies – AFMET, PALMIRA & SAMICO - were supposedly reputable firms like MacAllister Elliot & Partners of the UK. Warlords Gen. Mohamed Farah Aidiid, Gen. Mohamed Hersi Morgan, Osman Atto and Ex-President Ali Mahdi Mohamed officially and in writing gave authority to AFMET to issue fishing “licenses”, which local fishermen and marine experts call it simply a “deal between thieves”. According to Africa Analysis of November 13, 1998, AFMET alone “licensed” 43 seiners (mostly Spanish, at $30,000 per 4-month season. Spanish Pesca Nova was “licensed” by AFMET while French Cobracaf group got theirs from SAMICO at a much discounted rate of $15,000 per season per vessel.