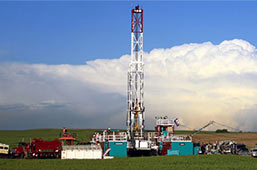 Cartels and monopolists tend to react to competition in very predictable ways - one of which is to lower their prices until the competition is driven out of business due to lack of profitability. OPEC nations want higher oil prices because their economies are built on maintaining a certain price level.

Bloomberg has a pretty good analysis of what price levels are needed for each OPEC state to make ends meet here. Saudi Arabia needs a price point of $106, Iran $87, Venezuela $125.

Current market price for a barrel of oil is below $50. Why so low? Part of the reason is the attempt to drive U.S. shale oil producers out of business and eliminate them as competition and allow OPEC to be back in the oil pricing and demand driver seat.

There's an interesting analysis from FGE's  Fereidun Fesharaki and David Isaak about why that may not be working so well from Oil & Gas Journal FGE: US unconventional industry shows resilence as OPEC reacts to shale production and prices


When the "War on Shale" began, it was common to hear that substantial drops in production would occur at $90/bbl, $80/bbl, or $70/bbl. And, it was true that to make the overall economics work, those sorts of prices were needed for many producers in certain plays. But the overall economics include the lease costs, which for some producers represents a very large fraction of the total cost. But lease costs are sunk costs, and once the investment has been made, they do not have much effect on production economics. So there are projects that might require $70/bbl to make money, but the operator can still keep producing at $40-60/bbl.
Some aspects of shale economics were improving at astonishing rates, even with the cushion of high prices. Total well depths typically more than doubled in the last 6 years, as did lateral runs lengths. Despite greater depths and lateral runs, typical drilling times per well were cut in half (to 17 days from 35), and some wells are now drilled in 9-12 days. In addition, multiple wells now are drilled from single production pads, meaning that the drilling equipment can be repositioned and restarted in a matter of hours rather than days.
As is widely known, productivity per well also has skyrocketed. This is the result of many factors, such as fracturing practices geared to specific local geology, improved use of proppants, and the longer total runs per well. But one of the reasons productivity is climbing is simply that the producers have begun to concentrate on the best plays.
In the early days of shale, most of the producing wells were also effectively exploration wells. In addition, many wells in the Great Rush were drilled simply because lease terms required a certain amount of drilling and output to avoid the lease reverting to the owner (leases held by production, or HBP drilling in industry jargon).

But as long as oil prices remained high, there were costs that tended to rise rather than come down. Labor was short, operating costs tended to rise, good drill rigs were at a premium, proppants and chemicals saw major price increases, and common items such as compressors were backordered. In addition, limited (and expensive) transport infrastructure cut netbacks to the wellhead.
***
Costs Have Fallen
Lower prices and increased productivity have to some extent reversed those trends. In the new low-price environment, costs have fallen-some producers report operating costs down by 20% or more. Rig counts are down, and this not only lowers the cost of rig hire, but it also means that only the best rigs are employed. Finally, although cheap transport infrastructure still falls short of demand, improvements in getting liquids to market have been steady.
That does not mean prevailing prices do not hurt. They have definitely put an end to the Great Rush. But the main effect has been to put the US shale business on a sounder footing. In the new environment, the less productive leases and plays are likely to be abandoned (which will look to the market like another major increase in well productivity). Improvements in drilling and production economics improved the bottom line before, but now additional improvements are required rather than optional.
What does this mean for production of tight oil and gas? With all the time-lags involved, it is becoming harder to assess. The large producers have slashed their E&P budgets for 2015 by about a third; and smaller producers have implemented even bigger cuts. Despite this, most of the producers report that their output of oil will be higher for 2015 than for 2014.
Monthly production declines are already occurring-although even the modest crude price revival of the last few months was enough to encourage a few producers to begin deployment of additional rigs for mid-summer. But a confounding factor is that many producers have elected to delay completions on wells that have already been drilled. Completion (casing and installation of production trees and piping) is expensive-and not needed unless the well is going into production. Some statistics suggest that as many as half of the wells drilled in the Bakken are deferring completion. Some companies (notably EOG Resources Inc. and Apache Corp., both of Houston) actually are deferring more wells in 2015 than their total new wells in 2014. This means that in the coming months and years, there may be small surges in production that are seemingly unrelated to drilling.
Crude prices need to be driven well below recent levels to put shale out of business. Conversely, mild increases in price can draw in new production comparatively rapidly. Deferred well completions add to the price responsiveness. Shale production is surprisingly resilient in the range of $50-60/bbl, and prices above $60/bbl may draw in significant new production.

So, OPEC, thanks for forcing the shale oil industry into streamlining and improving.

And good luck on that "control of the market" thing.

The U.S., according to the U.S. Energy Information Administration seems to be sitting pretty on shale: 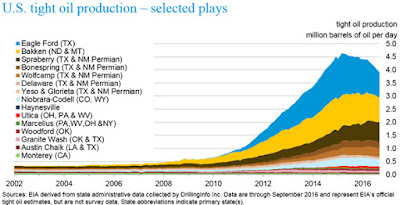 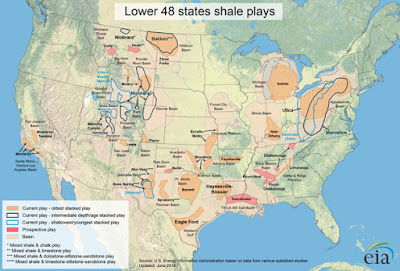