NYTimes reportFreed Sailors Recount Years of Torture at the Hands of Somali Pirates:

. . .during which the crew members were beaten with bamboo poles, ate rats to survive and were held at gunpoint in a sweltering stretch of Somalian desert by a band of pirates who were convinced they were going to make many millions of dollars.

It all ended this weekend. The pirates finally relented, accepting a smaller amount to release the 26 surviving members of the Naham 3 crew after one of the longest pirate hostage ordeals ever endured.
***
Mr. Libres, a Filipino sailor, seemed almost confused about how his captors could be so heartless. “The pirates are worse than animals,” he 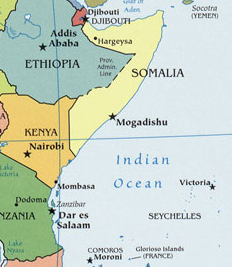 said. “You can’t understand these people.”
***
Still, dozens of sailors remained in captivity from earlier attacks. Negotiators had been working for years to free the crew of the Naham 3, an Omani-flagged vessel hijacked while fishing for tuna near the Seychelles.

“The pirates were uneducated, obstructionist, unmotivated and unrealistic,” said Leslie Edwards, the lead negotiator for the sailors’ release. “They picked poor fishermen from poor countries from poor families. They were dreaming about huge amounts of money they were never going to get.”

In the end, negotiators worked with clan elders in Somalia to persuade the pirates to accept a relatively small amount of money to cover the costs of holding the captives for 1,672 days. The negotiators did not disclose the amount, though they said it was “nothing” compared with what the pirates originally demanded. A British law firm helped raise the money, and the rescue mission was coordinated by Oceans Beyond Piracy, a project run by an American nonprofit organization.

The pirates have a bad business model that does not reflect the current realities of their operating area. Essentially, their current targets will be the crews of outlaw fishing boats which intrude on Somali waters. It's a high risk venture with low rewards if only the costs are being covered.