Leadership is an odd thing, since so much of it depends on perception - and the current president of the Philippines has perceived that China is the big dog in his region, as Reuters reports in "Duterte says U.S. has lost, aligns Philippines with China": 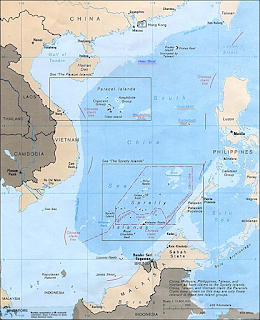 Philippine President Rodrigo Duterte announced his "separation" from the United States on Thursday, declaring that it had "lost" and he had realigned with China as the two agreed to resolve their South China Sea dispute through talks.

Duterte made his comments in China, where he is visiting with at least 200 business people to pave the way for what he calls a new commercial alliance as relations with longtime ally the United States deteriorate.

His trade secretary, Ramon Lopez, said $13.5 billion in deals would be signed

Duterte's efforts to engage China, months after a tribunal ruling in the Hague over South China Sea disputes in favor of the Philippines, marks a reversal in foreign policy since the 71-year-old former mayor took office on June 30.

"America has lost now," Duterte told Chinese and Philippine business people at a forum in the Great Hall of the People, attended by Chinese Vice Premier Zhang Gaoli.

"I've realigned myself in your ideological flow and maybe I will also go to Russia to talk to (President Vladimir) Putin and tell him that there are three of us against the world - China, Philippines and Russia. It's the only way," he added.

Lord Palmerston had it right:


“We have no eternal allies, and we have no perpetual enemies. Our interests are eternal and perpetual, and those interests it is our duty to follow.”

President Duterte may not be everyone's cup of tea, but he does seem to have a strong view of where the interests of the Republic of the Philippines lie. He's decided that China is the stronger horse, or as that now dead chap Osama bin Laden said:


“When people see a strong horse and a weak horse, by nature, they will like the strong horse”

While thinking about protecting U.S. interests in the Pacific, it might be time to look hard at those islands that are U.S. territory out there in the Pacific, like Wake, Midway, etc, and building up our attack submarine force.

UPDATE: Vietnam announces an "enemy of my enemy is my friend" hedging strategy as set out here:

You might note that Vietnam has couched its "support" with a few "ifs."