People die in hurricanes, see here, which lists 21 deaths from hurricane Matthew. In North Carolina, we've had 14 of those deaths. The large majority of which involved people dying because they drove their cars into high water and got 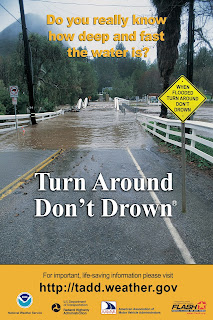 trapped or swept away or otherwise put themselves in a position to drown.

Back when the death toll was slightly lower, there was this:


The 11 deaths in North Carolina included some victims who drowned after driving onto flooded roads.

"I cannot stress more: If you see a road that's flooded, do not take your car through that road," McCrory said. "If you see a barrier, do not go around that barrier."


Fourteen people have been killed in the state, most of them occurring when motorists were swept away on flooded roads, McCrory said during a Tuesday morning press conference.

One person was killed in Johnson County when their car was washed away, McCrory said Monday.

McCrory said during a press conference Saturday that one person died in Sampson County after their vehicle hydroplaned in heavy rain. Two others were killed in Bladen County when their vehicle became submerged.

A fourth victim drowned in Harnett County after the victim drove past a barricade and was swept away into a creek, the county sheriff told FOX8.
***
During a Sunday morning press conference, the governor said two deaths were also reported in Johnston County and one in Pittman County.

The News & Observer reported that one of the deaths was 19-year-old Diamond Shuntelle Bennett, whose car was swept away in flood waters on Interstate 95 near Four Oaks on Saturday night, according to Capt. Jeremy Johnson of the Four Oaks Fire Department.

One person died after five people were trapped inside a submerged Nissan Versa in Cleveland.

“Four escaped and were able to cling to trees until rescue arrived,” State Highway Patrol spokesman Lt. Jeff Gordon told The News & Observer. “The other they’re still looking for and is presumed deceased.”

In addition to the deaths, people driving into flood waters who do not get killed need to be rescued, which places their rescuers in dangerous situations.


A 63-year-old woman, who was on her way home from her nursing job at a long-term care facility, clung to a tree for three hours after floodwaters from Hurricane Matthew swept her car into a canal in Wilson, AP reports.
***
North Carolina Highway Patrol troopers helped 25 vehicles after they became stranded on Interstate 95 Saturday. The cars got caught on a stretch of road between two parts of the flooded highway.

State officials say emergency responders have conducted at least 77 water rescues from cars and homes in Fayetteville alone, according to The News & Observer, including the dramatic rescue of a woman and her child from a car that got caught up in the floodwaters.


If it's true for hurricanes, it's also true for thunderstorms, as set out here:


Each year, more deaths occur due to flooding than from any other thunderstorm related hazard. The Centers for Disease Control and Prevention report that over half of all flood-related drownings occur when a vehicle is driven into hazardous flood water. The next highest percentage of flood-related deaths is due to walking into or near flood waters. People underestimate the force and power of water. Many of the deaths occur in automobiles as they are swept downstream. Of these drownings, many are preventable, but too many people continue to drive around the barriers that warn you the road is flooded. A mere 6 inches of fast-moving flood water can knock over an adult. It takes just 12 inches of rushing water to carry away a small car, while 2 feet of rushing water can carry away most vehicles. It is NEVER safe to drive or walk into flood waters.

Oh, and when given the warning to evacuate before a storm, evacuate. When the water begins to rise around you, an attempt to drive out then may just kill you. So pack up all your valuables and get out early. There's always higher ground to be found before the storm.