Anchors turn out to be weakest links 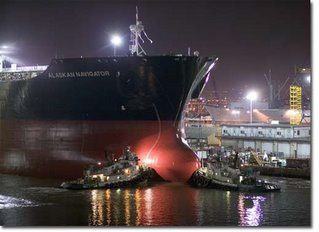 Two of BP's new double-hulled oil tankers are sitting idle off Washington state after each lost an anchor while sailing through rough North Pacific waters, company and Coast Guard officials said Thursday. An investigation into how the anchors got away revealed "material defects" in the enormous steel claws, said Anil Mathur, president of Alaska Tanker Co., a Beaverton, Ore., company that hauls North Slope crude oil for BP. Each anchor weighs 16 tons, stands more than 13 feet tall, and hangs at the bow of one of the identical 941-foot ships. One ship, the Alaskan Navigator, discovered an anchor missing on Dec. 26 and the Alaskan Frontier lost one Dec. 23, Mathur said.

I guess the loss of two anchors proves it was no fluke. I wonder if BP stocks spare anchors or goes stockless. 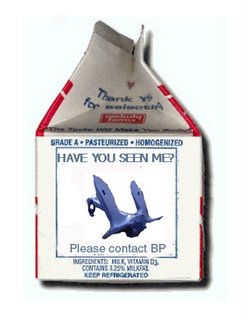