Iran: What happens when you devote your energy to making nuclear weapons and ignore the other things: " Iran smog 'kills 3,600 in month" 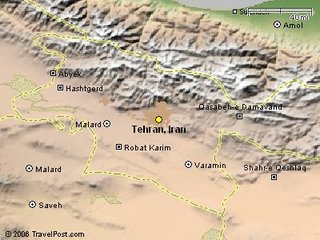 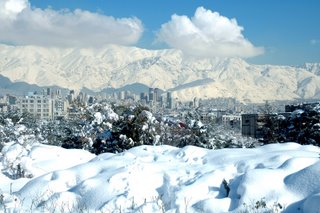 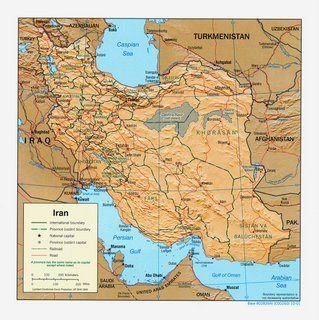 Air pollution is estimated to have killed nearly 10,000 people in Tehran over a one-year period, including 3,600 in a month, Iranian officials say.

Most of the deaths were caused by heart attacks and respiratory illnesses brought on by smog, they said.

The scale of the problem led one senior official to say living in the Iranian capital was like "collective suicide".

Cheap fuel encourages car use in Iran, correspondents say, and many vehicles do not meet global emissions standards.

"It is a very serious and lethal crisis, a collective suicide," the director of Tehran's clean air committee, Mohammad Hadi Heydarzadeh, told an Iranian newspaper.

"A real revolution is needed to resolve this problem."

About 12,000,000 people live in the Tehran metro area according to this. Snow photo is, as you might gather, on a clear day, Wikipedia adds:

Tehran, like many big cities, suffers from severe air pollution and the city is often covered by smog making breathing difficult and causing widespread pulmonary illnesses. It is estimated that about 27 people die each day from pollution-related diseases.[2] According to Iranian officials, 3,600 people died in a single month due to the poor air quality. [3]

The air pollution is due to several different reasons: 1) Economical: most Iranian industries are located on the outskirts of Tehran. The city is also overrun with old and aging cars which do not meet today's emission regulations. Furthermore, Iran's busiest airport, Mehrabad International Airport, is located in the west of the city; 2) Infrastructure: Tehran has a poor public transportation network. Buses and metros do not cover every area of the city. Most people are then obliged to either use private cars or hire taxis. This has created severe traffic and congestion; 3) Geographical: Tehran is bound in the north by the massive Alborz mountain range that is stopping the flow of the humid Caspian wind. As a result, thermal inversion that traps Tehran's polluted air is frequently observed. The lack of humidity and clouds makes Tehran a very sunny city. The UV radiations then combined with the existing pollutants significantly raise the level of the ozone.

The government, however, is engaged in a battle to reduce the air pollution. It has for instance encouraged taxis and buses to convert from petrol engines to engines that run on compressed natural gas. Furthermore, since 1979 the government of the Islamic Republic of Iran has setup a "Traffic Zone" (طرح ترافیک) covering the city center during peak traffic hours. Entering and driving inside this zone is only allowed with a special permit. The government is also trying to raise people's awareness about the hazards of the pollution. One method that is currently been employed is the installation of Pollution Indicator Boards all around the city to monitor the current level of particulate matter (PM10), nitrogen dioxide (NO2), ozone (O3), sulfur dioxide (SO2), and carbon monoxide (CO). The board also displays the Pollutant Standard Index (PSI), which is a general indication of air quality based on the measurements of the above-mentioned five pollutants. The Pollution Indicator Boards classify the level of each pollutants as either safe, hazardous or dangerous.