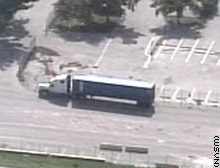 Breaking news about some odd goings on at the Port of Miami here:

The container truck was stopped near the cargo-area entrance to the port around 8 a.m. and the driver of the vehicle, who had valid port identification, was questioned by authorities.

"The driver of the 18-wheeler was apparently asked several questions — we're told routine questions — and at one point, he said he was alone," FOX News' Nancy Harmeyer said.

Police became suspicious and discovered two men hiding in the sleeper cab of the 18-wheeler. All three men are of Middle Eastern descent. The men are believed to be in the country legally and were being questioned by the FBI.

"At this time we don't know why they were here, what they were planning to do, or quite honestly even if the driver knew that the two men were back there," Harmeyer said.

The driver reportedly is of Iraqi descent and one of the other two is a Lebanese national; the third is also believed to be Middle Eastern and early reports stated authorities have a warrant out for one of the three but none of the detained is on a terror watch list, sources said.

UPDATE: Well, potentially serious. Little hard to trust all the initial hyperventing news reports, but apparently a "nuke screen" revealed nothing and normal protocols are being followed, including having the bomb squad and Haz-Mat teams on site. As these things go, probably good practice for all hands. Normal port operations seem to be on-going including routine departures of cruise ships.

The Miami Herald reported that ‘suspicious’ 55 gallon drums were found in the back of the truck, and that while the driver's paperwork claimed he was carrying auto parts, no such cargo was found on the truck, according to authorities. The drums and the discrepancy raised suspicions, and prompted the search.

Police said when the driver was stopped at the security gate, he appeared nervous and would not make eye contact during questioning, authorities said. The driver said he was alone but police later found two other Middle Eastern nationals hiding in the truck's cab.

Also, the driver's manifest indicated he was carrying auto parts, but nothing like that was found in the truck, authorities said.

None of the men has been arrested. They were being detained for questioning.

''Port operations have not been impacted,'' said Miami-Dade police spokesman Robert Williams. ``The cargo area and the cruise ship area were not impacted.''

FBI spokeswoman Judy Orihuela said the driver and the others were placed in custody. The hidden passengers were a second Iraqi man and a Lebanese national. Both were found inside the small cab of the blue and white semi.

Even if nothing dangerous is found on the truck, the circumstances are very suspicious. If nothing else, it might be a probe of the port's defenses. Al Qaeda is well known for its thorough preparation...

Or maybe there is a logical explanation, which I will not be holding my breath to hear... 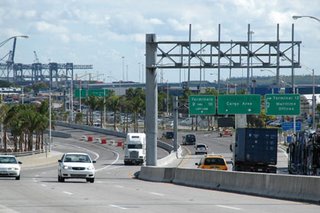 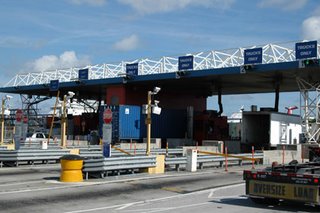 Port of Miami website here.
Nearby photos are from that site, showing the cargo truck security access point. 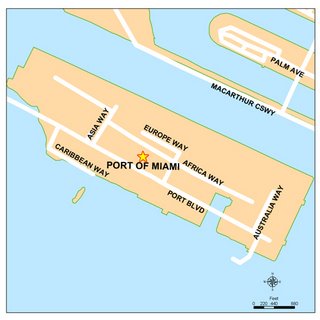 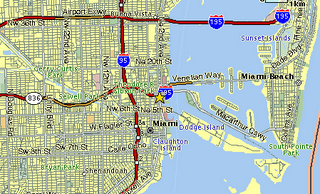 Maps of the Port of Miami.

UPDATE6: Live blogging the press conference. Let's see how much of the initial reporting was totally wrong.

What "miscommunication?" Lack of ID, admin stuff and driver said he was by himself. Other guys were just along for the ride? Brother and friend. Legal residents of U.S.

Still trying to figure out what got into these guys heads...

UPDATE8: Let's count the errors: 1. No 55 gallon drums 2. The manifest did match the cargo and vice versa. On the other hand there is the issue of the two extra guys in the truck...

Once again, a reminder to not trust initial reports. And an impressive show of how the port security system can work. Well done to the security guard who was paying attention!

A port security officer became suspicious when the truck driver could not produce proper paperwork in a routine inspection to enter the port about 8 a.m., Goldberg said.

The driver also indicated he was alone in the truck, though security officers found two other men in the cab, she said. The passengers, ages 28 and 29, were a friend and a relative of the 20-year-old Iraqi driver, she said.

"Due to a miscommunication between the gate security personnel and the truck driver, we believe there was a discrepancy in the number of people in the vehicle," Goldberg said. "This, and the fact that one of the individuals did not have any form of ID, raised our level of concern."