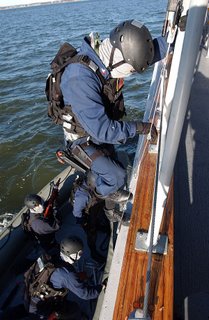 Sailors and assets from the U.S. Naval Academy provided a unique training opportunity Jan. 10 and 17 for the crews of USS Thunderbolt (PC 12) and USS Hurricane (PC 3) in the Chesapeake Bay.

The exercises were part of Thunderbolt and Hurricane's theater-tailored Advanced Phase Training Exercise, designed to prepare the crews for upcoming deployments.

Patrol Coastal (PC) ships are responsible for conducting Maritime Security Operations to include Maritime Interdiction Operations, as well as visit, board, search and seizures (VBSS) to prevent smuggling, piracy and human trafficking.

"The YP gave our VBSS teams an opportunity to actually experience what it's like to hook and pull a vessel that is underway and exposed to all of the elements," said Thunderbolt Commanding Officer Lt. Scott W. Larson.

"We were able to board a real vessel that was moving on water and in conditions that were not ideal," said Lt. j.g. Steve Phillabaum, ThunderboltÂ’s operations officer. "We are used to practicing on a training platform where weather conditions were non-existent. But here we did it out in the cold just after early morning."

The experience was equally beneficial to the Naval Academy Sailors.

"Participating with the crew of the PCs is valuable because the junior Sailors aboard the YP's often have no prior deployments or exposure to shipboard operations, and this gives them a taste of actual boarding and underway operations," said Senior Chief Quartermaster (SW) Herbert Kelton of YP Operations. "Training also reconnects and strengthens our relationship with the fleet."

I don't know who deserves credit for the idea, but it's a good one.