MSC Napoli: What the crowds are doing is wrecking 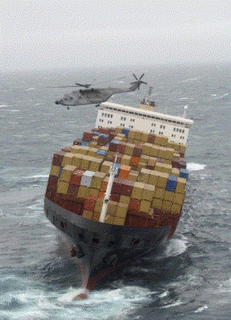 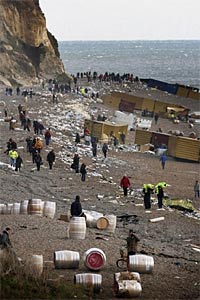 Along with piracy, one of the ancient arts of intercepting commerce is wrecking:

Wrecking is the practice of taking valuables from a shipwreck which has foundered near or close to shore.

This practice is often illegal and equivalent to looting. In the United Kingdom, in many cases, the ship and cargo remain the property of the original owners and all salvaged articles must be reported to the Receiver of Wreck so that ownership can be determined.

In some cases ships were deliberately lured into danger; for example by faking the signals from lighthouses, so that the ship was wrecked and the cargo could be plundered. Wrecking is no longer economically significant, however as recently as the 19th century in some parts of the world it was the mainstay of many otherwise economically marginal coastal communities.

Wrecking was well known in Cornwall, where the rocky coastline, strong prevailing onshore winds and (sometimes) the display of false lights led many ships to disaster (this is also true in other parts of the celtic seaboard, such as South-west Ireland, the Vale of Glamorgan in Wales and Finistere in Brittany). Rather than helping shipwrecked sailors, the wreckers often murdered and stripped them of their possessions, for example Sir Cloudesley Shovell. The ships themselves were looted for their cargoes.

Prior post on ship wreckers here. It seems English law is somewhat unique in its treatment of flotsam and jetsam.