Everything old is ...the "'New' Brown Water Navy 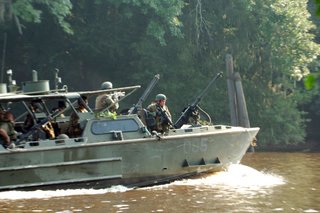 Found in All Hands! here:

The battle on the waterways has moved from the dense jungles and harsh humidity of Vietnam’s Mekong Delta of yesteryear into the open deserts and dry brush near the banks of Iraq’s southern rivers. Protecting infrastructure, cutting off enemy escape routes, severing supply lines, searching out and destroying enemy troops and bases and providing a safe route for coalition troops to accomplish the mission is now the job of the newly resurrected Riverine Squadron (RIVRON) 1, part of the new Navy Expeditionary Combat Command (NECC).

“We’re always going to need the ability to control the waterways in whatever country we go to,” said Hull Maintenance Technician 2nd Class Cameron J. Hohimer. “The ability to do that in countries we’re friendly with training them and building relationships the way we have been trained is definitely a good asset to the war on terror.”

Moving out of the water and onto the sands of Iraq is a harsh reality check for many Sailors in today’s environment. Strapping on a 50-pound pack, wearing 30 pounds of protective combat gear and carrying a weapon is what is being asked of them more and more often.

"We cannot sit out in the deep blue, waiting for the enemy to come to us. He will not. We must go to him,” said ADM Mike Mullen, Chief of Naval Operations in a recent speech given at the Naval War College, Newport, R.I. “We need a green-water capability and a brown-water capability. I want the ability to go close in and stay there."

With NECC standing up RIVRON-1, the Navy is creating an armada of small but swift watercraft. Small Unit Riverine Craft (SURC) provides Sailors with a combat-capable boat that allows them
to navigate waters much too shallow for conventional ships. Insertion teams now can be rapidly deployed, saving lives in
the process by driving right up on the river banks.