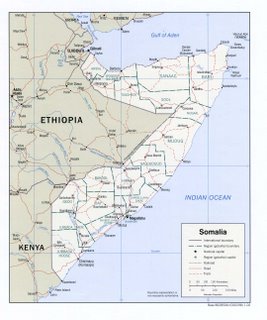 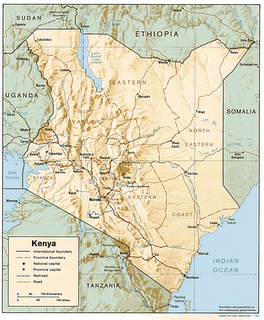 The fleeing fighters crossed the border at Liboi in Garissa District on Sunday. The eight were seized as reports indicated that heavily armed bands of militia were in full flight headed for Kenya.

Kenyan forces at the same time threw tight security cordons along the border in North Eastern and Coast provinces to bar the fleeing militia from entering the country.

Meanwhile the UIC is being forced fromtheir "final" refuge...as set out here:

The Islamist forces in Somalia abandoned their final stronghold Monday morning, fleeing the port city of Kismayo much like they had fled Mogadishu, the capital, last week.

In the face of an intense artillery barrage by Ethiopian-backed forces and thousands of well-equipped troops heading their way, the Islamists scattered, with some of their militia shedding their uniforms and melting back into the population while others headed south towards a thickly forested area along the Kenya border.

"I can't tell you how happy people were that they disappeared," Adam Ragay, a businessman in Kismayo, said today.

As soon as the Islamists left, looters rushed into the streets and smashed up stores and ran away with TVs and mobile phones. But by mid-afternoon, the brief burst of anarchy was over and transitional government troops had arrived on the outskirts of town.

"I can confirm to you that our forces have captured Kismayo," Somalia's transitional prime minister, Ali Mohamed Gedi, told The Associated Press today.