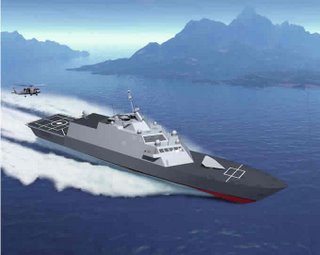 The Navy has issued a stop work order today to Lockheed Martin Corp. Maritime Systems & Sensors unit, Moorestown, N.J., for the construction of the third Littoral Combat Ship (LCS). This stop work order will take effect immediately and is for a period of 90 days.

The stop work order was issued because of significant cost increases currently being experienced with the construction of LCS-1 and LCS-3, under construction by Lockheed Martin.

“I determined that at this point in time it was critical to stop work on LCS-3 to assess the LCS program and ensure we understand the program’s cost and management processes before we move forward. It is essential that we complete LCS 1 and get it to sea so we can evaluate this new ship design” said Secretary of the Navy Donald Winter.

"We believe these increased costs are due to an underestimation of labor hours," said Lt. John Gay, a spokesman for the Navy, in a telephone interview, noting the Navy had not changed requirements on the initially awarded contract granted in June 2004.
***
According to Lockheed, several issues raised costs including incorrect reduction gears supplied by vendors, a six-month delay in receiving high-grade steal (sic) and the Navy's decision to apply standard vessel production rules when constructing the ships.

Yeah, you gotta pay extra for that "high grade steal."

A recent cost review of the USS Freedom showed that the estimated price had jumped from a planned $220 million to between $331 million and $410 million, according to a Navy official. That ship is under construction by Lockheed Martin and scheduled to be delivered to the Navy this summer.
***
Another factor in gauging Congressional response to the program’s cost growth, the Congressional naval analyst pointed out, is that the ships are being built at three small shipyards that have not done a lot of Navy work.

“People from the big yards” — the six major shipyards owned by Northrop Grumman and General Dynamics — “have always regarded LCS as a threat,” the analyst said. “This doesn’t help that.”

The pace of acquisition is key to the Navy’s desire to rapidly get the ships in service to perform close-to-shore combat missions.