MSC Napoli Update: Getting the containers off 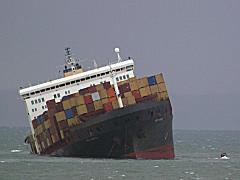 After some delay caused by mechanical isues, divers are going aboard to check on container locations and heavy lift cranes are positioning thmeselves for offloading containers, as set out here:

A team of about 20 salvage operators will be involved, some of them divers, who will go into the ship which has been flooded with water and oil.

The divers will be putting their lives at risk when they move around the precariously positioned containers to find the best ways of getting them off.
***
Mr Clark said they would have to take the "greatest of care" with such a dangerous work area.

"The vessel is at an acute angle with crushed containers and spilling goods. People have to get on those containers and secure heavy chains so it's a very dangerous job," he said.

"Their lives are more valuable than the cargo."