Railroad tank cars cause some concern 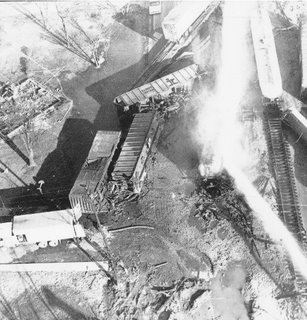 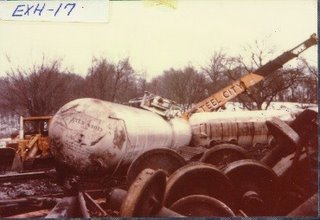 TO THE THOUSANDS of residents and commuters who see them each day, the big steel tanker cars are ubiquitous features of the Bay Area's transportation landscape, parked on railroad sidings along with low-profile container carriers, steel-mesh auto carriers and bulging grain hoppers.

But to terrorism experts, emergency officials and chemical hazard researchers, they are lurking weapons of mass destruction, waiting for mishap or sabotage to set them off.

At a U.S. Senate hearing Jan. 18 the problem of highly hazardous chemical rail tankers in urban areas was listed as the Transportation Security Administration's second biggest threat to surface transportation, after direct threats to passenger rail systems that travel beneath the ground or water.

More than 100,000 tankers full of toxic inhalation hazard chemicals, such as chlorine and ammonia, are shipped through the nation annually out of a total of about 1.2 million tankers carrying materials considered hazardous in varying degrees.
***
Liquid petroleum gas, also called propane, sits in strings of black tanker cars on sidings between the Bay shore's refineries from Richmond to Martinez and beyond.

"A really big release outside can explode," Koopman explained. "The fire would heat the other propane cars until they explode, and that creates a huge explosion."

Koopman said he believes LPG is even more dangerous than the controversial liquid natural gas, which environmental activists have staged a high-profile campaign against bringing to California.

New rail couplers and steel plates have reduced the chances of an accidental rail car puncture, he said, but would not stop an act of sabotage.

An earlier warning piece from the Pittsburgh Tribune-Review.

And the number deaths from BLEVE explosions from rail tank cars in American history? Well, 16 in Waverly, TN in an accident involving a single walled tanker. More on Waverly here.

Two fire fighters in Iowa in 1998 and

NFPA's fire investigations database turned up two similar fatal fires that took place on farms in 1993 and 1997, the first in Warwick, Quebec, Canada, and the second in Illinois. Like the Albert City fire, these two occurred on farms where propane was used to heat buildings. In each case, the tanks' relief valves were operating when firefighters arrived, but they couldn't stop flames from impinging on the tanks and weakening the tank shells. And in each case, tanks ruptured in BLEVEs that sent pieces of metal flying at high velocities in random directions, killing those caught in their path.

Back in the '60s and '70s, when derailments of rail cars carrying liquid propane posed a real challenge, the railroads, the gases industry, and the fire service all worked to improve LP-Gas storage, handling, and firefighting. One of the best-known railroad incidents occurred in Crescent City, Illinois, in 1970, when 10 tank cars carrying more than 34,000 gallons (128,700 liters) each derailed. Three BLEVEs resulted, generating enough force to blow people, railroad ballast, ties, and track into the street, destroying most of the business district and several homes. Sixty-four people, many of them firefighters, were injured.

After several BLEVEs of this type, the railroad industry retrofit all tank cars carrying liquefied flammable gases by adding thermal protection, which protects against high temperatures that can weaken metal. Shelf couplers were also developed to prevent cars from uncoupling vertically, and head shields were fitted to protect against punctures from the couplers. Since these retrofits were completed in 1980, there have been no BLEVEs of tank cars in the United States.

Under rapid heating (for example, from a pool fire engulfing the tank), a tank containing pressurized liquid may fail suddenly producing an explosive effect. The liquid in the tank absorbs energy from the surrounding fire and heats up rapidly. The resulting increased rate of vaporization produced increases the ullage pressure. When this pressure exceeds a certain limit (characteristic of the material properties of the tank wall, wall thickness and temperature), the tank fails. The liquid released from the tank boils rapidly and expands. The resulting explosion may fragment the tank into pieces and propel them over large distances. If the hazmat is flammable, it may ignite and form a fireball posing additional hazard. This phenomenon is called a BLEVE or Boiling Liquid Expanding Vapor Explosion.

Remember the difference between the pressurized LPG carriesd by the railroads and the unpressurized LNG carried by LNG tankers. No BLEVE with LNG.
Posted by Mark Tempest at 1/28/2007 05:49:00 PM