Rescue in the English Channel 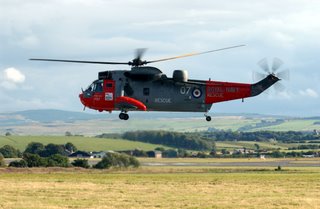 Twenty-six crew have been rescued from a damaged British container ship in the English Channel 50 miles (80km) off the Lizard in Cornwall.

The crew of the MSC Napoli abandoned ship after it got into difficulties. No-one suffered any major injuries.

The 62,000-tonne vessel took in water through a hole in its side as it made its way through the Channel.

Two helicopters from RNAS Culdrose airlifted all the crew in the French co-ordinated rescue.

Falmouth Coastguard received a distress call from the Napoli at about 1030 GMT after a 1m by 0.5m (3ft by 1ft 6in) hole in its starboard side started letting in water.

The crew of 275m (900ft) long ship, owned by Mediterranean Shipping Company, then abandoned ship for a lifeboat.

The rescued crewmembers were taken back to RNAS Culdrose
Despite storm force winds, the Royal Navy aircraft, from 771 Search and Rescue Squadron, were able to hover above the crew's lifeboat and perform the rescue in what were described by the rescuers as "pretty horrific" conditions.

Flying the venerable H-3 Sea King helicopter, too. Best line from the pilot:

One pilot, Capt Damian May, said his aircraft was nearly having to surf the waves.

He said: "Once we come alongside the lifeboat, the waves and the swell were up to 50ft, which effectively meant we were going up and down 50ft in the dips of the swell and the top of the waves while we were trying to maintain station on the lifeboat."