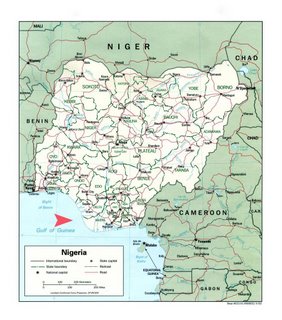 One of the most active piracy areas is the Niger River delta, where hostages have grabbed 6 Filipino sailors and one Nogerian, as reported here:

Seven seamen, including six Filipinos, were kidnapped from a cargo ship on a river in Nigeria's southern oil producing delta on Saturday, military and oil industry sources said.
The incident brings to nine the number of foreign workers being held hostage in the world's eighth largest oil exporter, where militant attacks have reduced oil output by a fifth.

"Six expatriates and one Nigerian were kidnapped off a vessel on Chanomi Creek in Delta State," said an oil industry source, who asked not to be named.

Other sources said the foreign hostages were Filipino, taken from a cargo ship operated by Germany's Baco-Liner, based in Duisburg, which runs between Europe and several ports across West Africa.
***
Militants and criminals seeking ransoms have kept up a series of attacks and kidnappings against foreign workers in the Niger Delta, a vast wetlands region which is home to all of Nigeria's oil resources.

Militants want to drive out foreigners and secure more regional control over the delta's oil wealth. The region is also blighted by violent crime, communal conflicts and corruption.